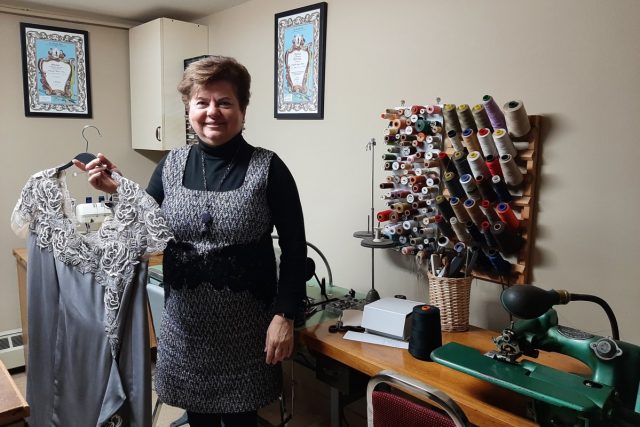 Maria Calautti, who offers international diplomas at Oro-Medonte school, says that there is no place she would rather be.

A second career for Maria Calautti has given five local women the chance to earn a prestigious international diploma — and it proves dreams can come true at any age.

Calautti spent 28 years of her working career raising her children and running the restaurant business together with her husband, Rocco. Calautti had always loved sewing. She learned the craft from her aunt and mother, as well as some classes in home economics in high school.

After searching the internet, she found an Italian school that teaches pattern drafting and began to improve her skills. The owner of the school suggested that she start teaching the technique.

Calautti began teaching in the evening classes at Georgian College. Later, she taught privately in a space along Highway 11. She now teaches in her Oro-Medonte house and online. Calautti opened her Oro-Medonte school at Le Grand Chic Italia School of Fashion in 2011.

“The school is unique because, in addition to receiving the recognition of successful completion from Italy, students have the opportunity to earn their Italian diploma in fashion design and construction without ever leaving the country,” said Calautti. “I also have the exclusive North American rights to distribute the kits necessary for the drafting method.”

Beginning student Elizabeth Wardrop says she is excited to have Calautti as a teacher. She had previously taken a North Bay tailoring course and made a bespoke jacket. However, it didn’t fit her right and made her miserable. Wardrop reached out to Calautti after one of the students mentioned Calautti.

“I reached out to Maria on Instagram and asked her if she would help me fix my jacket and, of course, she did,”Wardrop said.

“We needed three sessions where we worked on this jacket. We had to take in seams. We had to do numerous things. She would tell me what to do, and I would go home and do it. She helped me to learn how to fix my own jacket.”

Wardrop realized that she needed to learn more after the jacket project was completed.

“I had always made clothes from patterns, but they never fit well. So, I thought, ‘I need to do this,’ and now I am coming up every two weeks from Lefroy and I can do the homework in between,”She said.

Calautti’s five recent graduates spent four years honing their skills and have earned the bespoke tailor diploma and recognition of being a master tailor through Le Grand Chic Italia.

This diploma is only available to 13 people in North America. Calautti has been awarded the tailoring and teaching diplomas, as well as the modellista (pattern-maker) diploma in Italy in 2015.

One of the five graduates completed the entire course online and is now designing patterns in downtown Toronto.

According to Elizabeth Tan, a graduate, the students began with three-hour classes twice a week, with lots of homework between. This continued until the pandemic.

“Then we attempted Zoom classes, but they didn’t really work,”She said. “It was too hard for Maria to see the pencil marks on the patterns, and all those rustling noises with the tissue paper were a problem, too.”

Calautti discovered a large space that was safe from pandemics, and in-person students were able to continue their classes there.

“We ended up doing six-hour classes after the first two years. With the intensity and complexity of the work, it just made more sense,”Tan.

Anneke te Bökkel, a fellow grad, said that there were times when she could not attend in-person classes. “we did class every day. Between reviewing notes, making patterns, watching videos, and calling Maria, we needed this time out of class to do all the work.”

Students start off learning a basic block — how to take measurements and use them to create a custom pattern. Students then move on to learn additional aspects such as sleeves, pleats, and more according Tan and te Bokkel.

Everyone agreed that it is a huge plus to know how to make clothes that fit perfectly.

“The fit is paramount,”Calautti. “Everything else is second to that.”

While creativity and custom design are important, it is also possible to copy designer looks. Tan loved the coat Camilla Queen Consort wore and so she copied it.

Students are required to design unique patterns for their final exams. They then have to use these patterns to create clothing using all the knowledge that they have.

Both students agreed that Calautti is an excellent teacher.

“She is so positive, and uses mistakes as opportunities, not as problems,” said te Bokkel.

Calautti chimed: “I thoroughly enjoy teaching and this group. There is no place I would rather be than with like-minded individuals, imparting knowledge. The approach that I take as a teacher is to accentuate the positive.”

“If there’s a mistake,”She continued, “let’s see how well you can fix that, let’s see if you can make that a design feature. And half the time, they like the design feature better than the original.”

You can find more information about Le Grand Chic Italia School of Fashion at Oro-Medonte here.

The Boring Company’s Vegas Loop to add stop at the Fashion...

120 Times People Experienced The Most Unfortunate Fails And Just Had...