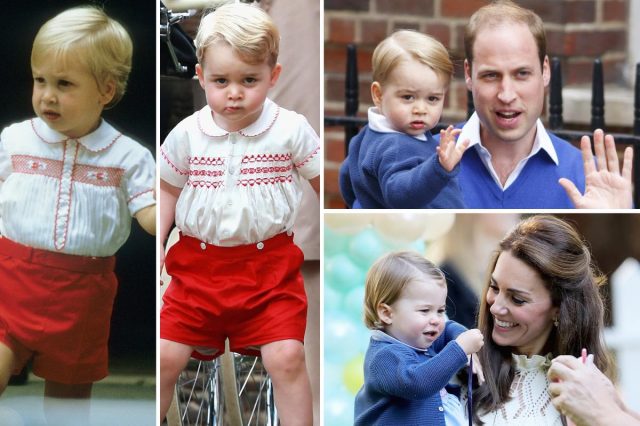 When it comes to kids’ clothes, the Cambridges like to stick to tradition.

Prince George, Princess Charlotte and Prince Louis are known for their adorable, timeless kidswear, but eagle-eyed royal fans might notice many of their cute looks happen to be hand-me-downs.

The Cambridge children have been known to repeat their clothing throughout the years, whether it was sporting styles worn by dad Prince William (or uncle Prince Harry), or passing down pieces from sibling-to-sibling.

The two princes have also been seen in outfits similar to those once worn by their father, keeping royal traditions alive even if the exact garments haven’t stuck around.

Below we take a look at 10 royal outfits that were so good, the littlest Cambridges wore two of them.

One of the most symbolic of royal re-wears took place during Prince George’s very first Trooping the Colour in June 2015. The future king was just 2 years old when he was brought out to Buckingham Palace in the exact same outfit Prince William wore in 1984 for his Trooping the Colour debut.

The Duke of Cambridge, just like his father Prince Charles, wore his bright red, regalia covered uniform while he held George on a balcony.

The gorgeous silk and lace christening dress that the babies wear on their special day is one royal outfit that is often worn again and again. The original piece, which was created for Queen Victoria and Prince Albert’s first child, Princess Victoria, was worn by royal babies for an incredible 163 years until it was deemed too delicate to continue being used.

Prince William wore this exact gown for his 1982 Christening. A replica was made for future royal generations. George and Charlotte wore the new version, as well as Louis and Louis.

Prince George coordinated with his proud dad in shades of blue when they went to visit newborn Princess Charlotte in the hospital, and a year later, little Charlotte re-wore her big brother’s sweater when the Cambridge family went on a royal tour of Canada.

While the red shorts were new and the prince’s white top had some slight differences (there wasn’t red embroidery trimming the buttons down the front), the overall look is strikingly similar to his dad’s.

The Duchess and Duke of Cambridge took some special portraits when her children were born. Royal fans might notice that Princess Charlotte wore the same knit white sleeper three years later to get his close-up.

Prince George wore a sweet-blue polo-style sweater to Canada in 2016 with his family. It was worn four years later by Louis, his little brother, when he met Sir David Attenborough in 2020.

Uncle Harry’s old shoes were made new again when Princess Charlotte sported them during the Duke and Duchess of Cambridge’s 2017 tour of Poland and Germany. The toddler sported the red leather Mary Janes 31 years after her uncle wore them to pet a bunny at the Highgrove estate in 1986; talk about quality craftmanship.

This was George’s second christening outfit, this time in a recreation of the one worn by Prince Louis on his special day in 2018. While Prince William wore a pair of light blue shorts and a crisp white shirt with blue piping for Prince Harry’s 1984 christening, George wore a very similar outfit from childrenswear brand Amaia Kids, but in a darker navy blue to attend his own brother’s christening day.

Prince Harry’s childhood clothes made another appearance in 2019, this time on Prince Louis. Little Harry wore a white shirt and matching shorts with blue embroidery in 1986 for Trooping The Colour’s second appearance. In 2019, Louis continued the tradition by wearing the vintage outfit to his Trooping debut.

Prince Louis might have stolen the show with his funny faces during the Queen’s Platinum Jubilee, but one detail royal watchers might not have noticed was that his outfit came straight from his father’s closet.

Prince William wore a light blue sailor suit with white and navy trim during the 1985 parade. Louis brought it back to take part in the carriage procession in 2022.

Ariel Rose - September 2, 2022 0
Parents are ready to say goodbye to their children and send them back home for some peace and quiet with less than a...

Community steps up for Encinitas family who lost everything in devastating...