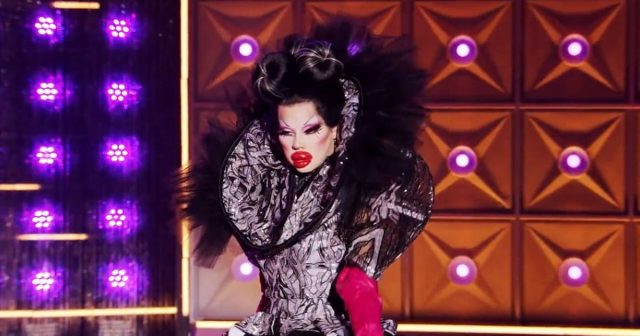 Here it is, folks! After fourteen episodes, we’ve arrived at our finalists of the season. For the first time in Drag Race Herstory, a top five.

This episode is one of the best episodes of season 14. It is a very agreeable ninety-minutes of television with little to none narrative momentum. I, for one, can’t wait for the finale where RuPaul will break the crown into pieces like Cady Heron at Spring Fling and then proceed just to crown them all in a five-way tie. They’re all cut $150k checks (at that point, more “stimulus check”More than “prize money”), and we can all go along our merry way.

However, as difficult as it is to find anything extraordinary in this episode, there’s also little to find fault with. The queens are performing triple duty as in previous seasons. In between trauma dumping on the main stage over a tic tac hors d’oeuvres, they must write and perform verses to the RuPaul song du jour. In this case, it’s the slow jam “Catwalk” off Ru’s new, critically-acknowledged hyperpop album “Mamaru.” It’s one of her better tracks, and it gives me hope that this might prove to be a more memorable iteration of this classic final five challenge. Let’s talk about it:

Lady Camden
I almost called Lady Camden the competition’s dark horse, but nothing could be further from the truth. She’s the full-blown frontrunner now, baby! Lady Camden came into this episode full of momentum and ended up with yet another win to her name. She’s now tied with Bosco for three wins and has never lip-synced for her life once (except for the post-Snatch Game fiasco.) I don’t know what it means that I have never (and still don’t) consider Lady Camden “the” frontrunner. Perhaps it’s Ru’s forever obsession with Willow Pill, Daya Betty’s sudden villain-to-underdog pivot, or my Irish urge to put down the British. It’s certainly not that I dislike Lady Camden. It’s far from it! There’s a reason she’s risen to the top. I expected her choreography to be flawless, but she also surprised and delighted me with her catchy lyrics and her skills as a video vixen. Even hours later, I find myself still whispering. “twist, turn … levitate. Act, pose … captivate.” On the runway, it’s classic Lady: elegant, expensive, and likable. Lady Camden wasn’t on my original list of guesses for the top four, but she proved me wrong. I’m excited to see what she has in store for the finale.

Daya Betty
Well, I must admit I didn’t see this coming either. Daya Betty is officially a Drag Race finalist. She joins Miss Vanjie & Shangela as the first eliminated Queen who showed she had more to show. Daya Betty, just like her sister Crystal is on the rise, grabbing the attention of judges at the same time as the pack shrinks. In the immortal words of the season’s narrator, Bosco: “she clawed her way to the top off of talent and pure hatred of Jasmine.” There’s no denying Daya is a savvy player. She says multiple times in this episode that she will do whatever it takes to get to the top, and I don’t doubt it. She soaks up every hint the judges throw at her and takes it out on herself (and often her sisters) if she’s not at the tippy top of her game. Michelle suggests to Angeria, during rehearsal, that she crawl on stage in order to make an impact. Daya Betty hears Angeria’s cries, but she is too busy to pay attention to the choreo notes. Michelle praises her for cosplaying a cat-like creature and immediately gets on her feet. Daya is no fool, despite the fact that Willow and Bosco have made a lot of strategic decisions.

Was her verse any good? I’m not impressed. The lyrics aren’t particularly memorable, and her flow leaves plenty to be desired. In my eyes, she’s immediately outshined by Lady Camden seconds later. But on the runway, there’s no denying Daya slays it. The show is won by Daya’s Victorian-inspired gown with a singed side bust, and the judges love it. She’s safe, and I can only imagine what tricks (or sabotage) she has up her sleeve next week.

Bosco
Despite Bosco’s middling critiques in this episode, I remain no less enthusiastic. I grow ever more fond of her as I hear her discuss her relationship with her mother during her tic-tac lunch, and she makes me laugh again and again as she describes the season’s antics with practiced ease in her confessionals. What can I really say? I have a soft spot in my heart for narrator queens. She does have one major problem in this episode, however: her outfit. In a new twist on the tradition, the queens design their own outfits. “Catwalk” music video, but they don’t have to sew them themselves. (I can imagine Deja working in her hotel room, passing yards of fabric under her doors. Perhaps it’s the material, perhaps it’s the cut of the bodice, but Willow is on the money when she says Bosco’s outfit is giving “soccer mom in space.”It’s not a bad aesthetic. It would look great on Katya, too. But for Bosco, it’s out of place, and it’s distractingly incongruous with the sexy, sinful lyrics she’s written for her verse. I just don’t know that one can realistically pull off the lyric “forgive me, father, for I have sinned. I did show some skin,”When she wears a full-coverage velour bodysuit and has a feathery hairstyle. That said, the lyrics are cool and her singing isn’t bad at all. The judges aren’t necessarily on board, but they do make sure to praise her journey this season from burlesque girl to comedy queen and admire the sheer versatility of skills (though not of silhouettes) Bosco has developed over her run in the competition. What about the finale? A top-two slot? It would be a great honor to see it.

Willow Pill
It’s almost baffling to me how negative the reception to Willow’s verse is, but let’s back up a little first. As usual, Willow is consuming major BWE (Big Winner Energy), throughout this episode. For most queens, The tic-tac lunch serves primarily as a final chance to reinforce their narrative arc and major talking points that we’ve seen throughout the season. It’s a way to wrap their final package from a storyboarding standpoint. Willow manages to elevate the package to something more, as usual. We learn more about her struggles with disability, her resilience, as well as her perspective on death and creating a legacy. It’s something that we last touched on back in season eleven with Willow’s drag sister Yvie Oddly (who’s diagnosed with Ehlers-Danlos syndrome), but Willow brings a groundedness and perspective to the topic that’s completely fresh: a wisdom that we’ve been lucky to bear witness to all season.

In “Catwalk,” Willow is as good as we’ve come to expect from her. The lyrics (while perhaps a little pander-y to RuPaul) are clever, the costume is right, and I’m thoroughly entertained. So you can imagine my surprise when the judges don’t seem to echo my praise. Ross claims she was dead in her face during the choreo and Ru says she seemed confused by her lyrics. This is great news! I found Willow’s performance compelling, and I had her pegged for the top two this episode. RuPaul seems just as passionate about Willow now than he did in episode 1. As she tells Willow, I can hear her shedding tears. “you’re a part of my tribe.” So despite this week’s setback, I’m not counting her out one bit.

Angera Paris Van Michaels
There’s no denying Angeria struggles in this episode, and it’s telegraphed from the beginning. Angie’s adversarial relationship with rhythm has been well-documented this season. From the Rusical, to the girl group challenge, Angeria’s struggle to pick up and memorize choreo has been a plot staple of every challenge. So it should come as no surprise that this challenge, which involves learning group choreography and then performing it mere minutes later, proves a real … well… “challenge”This week, for Angeria. Nothing is funnier to me than Michelle categorizing Angeria’s inability to pick up choreography — a skill that dancers work at for years if not decades — as an “inner saboteur” issue. Yes, truly, if only Angeria were to believe in herself more, she would suddenly be able to master intermediate-level hip-hop. The end result is the same: a cute song, a beautiful outfit but a shaky performance. She pays the price and lands at the bottom, where (much to the producers’ collective delight) she’s forced to lip-sync against her best friend, Willow.

So, we reach the final lip sync: Angeria versus Willow. I can see that shenanigans are underway as soon as they announce the bottom two. Two of the internet’s most beloved queens being forced to choose between their friendship and their place in this competition? Ru’s favorite queen in the world, Willow Pill? It simply stinks of producer shenanigans, and I have a hard time believing either of them will be sashaying away. Nonetheless, they do indeed lip-sync to the iconic Lady Gaga and Beyoncé duet “Telephone,”Willow hits it out of the park. Every beat is covered, every comedic opportunity is taken advantage of, and Willow even finds time to include Angeria in her onstage antics. She’s a born performer, and she’s effortlessly able to turn this song to her strengths. So when Ru announces Angeria’s name first, my suspicions are confirmed. There’s
no way Ru would send Willow home after that performance. And thank God I’m right. As repetitive as it’s been to witness non-elimination after non-elimination, the end of Willow Pill’s Drag Race run would not be a worthy trade-off.

With a little eye roll and a huge sigh of relief, the episode is over and our final five episodes are decided. The finale will feature a new queen to the show’s usual cast. There will no doubt be some stunts. Another lollapaRuza A cage match? Mud wrestling? I can’t wait to find out.

Keep on keeping on!

Keep up with all the drama on your favorite shows!

By submitting an email, you consent to our Terms Privacy NoticeYou can also opt to receive email correspondence.

School’s out for summer in classic fashion

Gwendolyn Stulgis gave away her wedding dress on Facebook. Other brides...