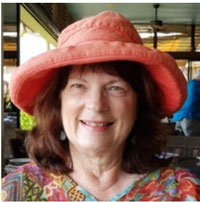 Robin Elizabeth (Forrest) Jacobson, mother and wife, storyteller, historian, storyteller, reporter, volunteer extraordinaire, world traveler. She passed away peacefully at her home with her family on Tuesday evening, August 2, 2022. She died from ovarian cancer. It was only 15 months ago.  She was 72 years old.

Robin was born in Wenatchee (Washington) on May 31, 1950 to Robert and Helen Jean Forrest. She had two younger brothers.  She lived in Spokane (Washington), Sacramento, California, and Moses Lake (Washington) during her childhood. There she graduated from Marycliff High School. Marycliff High School is an all-girls Catholic school.  She received her bachelor’s degree from The University of Washington, Seattle, majoring in communications.  In 1979, she moved from Seattle to Portland, Oregon, and in 1998, she moved to San Juan Island with her family.

She met her husband at an event on January 21, 1983. “ambush”A mutual friend invited them to dinner. Before their meeting, Robin’s friend guaranteed her that Barry would be “the man she would marry.”  After three dates, each worse than the previous, both came to their senses and had a memorable Valentine’s Day dinner. From that day on, they were never apart. Barry thought she was a little crazy to want to marry a guy with shared custody of three small children, but she knew she wasn’t. He thanked his lucky stars for this. They were married in Beaverton (Oregon) on February 25, 1984.

Robin knew exactly who and had a strong sense for justice. She was fired as a teenager for refusing to be with an internationally recognized celebrity.  Another time, she was fired from a radio station because she believed it was unfair and capricious. Robin-like, she stayed in her office and returned to work the following day.  She and her boss never spoke again about the incident.

Robin was fascinated by life and people, and she loved both. People responded to Robin, and she had many close friendships who shared her warmth.  She was fiercely loyal and loyal to her friends, family, and loved ones.  When talking with her, you knew you had 100%  of her attention.  She was a wordsmith on paper as well as in conversation.  Since her childhood, “in PR,” if she thought you’d made a bad decision, you’d know about it in Such polite manner.

She loved humor of all types – dark, dry and wry, funny and ironic or bizarre.  Funny cat videos are also a favorite. But she couldn’t tell a joke – often forgetting that one couldn’t lead with the punchline nor leave it out at the end.  Despite that, storytelling was one of Robin’s many passions.  She loved reading them, especially when they were about her. Tell them.  Woe to anyone who interrupts her storyline“It’s all about the flow!”).

She also loved history, particularly the San Juan Islands, which she adopted. She was often asked to assist other historians on the islands.  Despite her strong. Belief in the supernatural, she loved sharing ghost stories about those who were reputed to haunt the buildings in the San Juans. On several occasions, she even led “Ghost Tours”Friday Harbor: The haunting tales of many towns.

She was also passionately interested in genealogy.  She spent a lot of her life pursuing family lineages, including those of the San Juan pioneers, and speaking to groups about genealogy.

Robin’s fascination with genealogy was born when she tried to track down the truth behind one of her family’s legends. She was pleasantly surprised to discover that her ancestor wasn’t the famous Confederate general/founder the original Klu Klux Klan.  After that, she became hooked and began to research – even getting kicked out the LDS Genealogy Library Salt Lake City for trying too hard to stay open.

Robin was also a collector and designer of jewelry, fashionable clothing black slacks, dreidels as well as tchotchkes and greeting card. Everywhere occasion, and things of beauty.  She loved Broadway musicals (“Hamilton”The video has been viewed 28 times!), “Wicked”- Live, six time), cats (especially her beloved). “Taco”), doing the laundry, her husband’s cooking, and reading obituaries. She bought the Sunday paper to read about the lives that had passed.  She was also a frequent visitor to graveyards, visiting cemeteries across North America and Europe.

Robin believed that caring for others was her most important mission. (“I gave as much as I could of my time, and it wasn’t enough.”She gave her time with unrelenting energy to every community where she lived.  Notable service roles include the University of Washington events committee, volunteer mediator, Pioneer Square organizing Committee in Portland, security guard at Robin Hood Festival in Sherwood in Oregon, President of San Juan Schools Foundation, President of San Juan Historical Society Board of Trustees and head counselor for teens at Centrum Jam Workshop and Festival, Port Townsend for almost twenty years. Jill-of–all-trades for Soroptimists International of Friday Harbor.

The Orca whale was sheared in a fitting way. “adopted” through the Whale Museum is Hy’shqa – meaning “Blessing”Or “Thank you”In the Samish language.

A celebration of Robin’s life will be planned for the future.  Those who wish to make memorial donations can do so at her request. The San Juan Historical Museum and Soroptimist International of Friday Harbor.

Holly Willoughby’s This Morning outfit today: How to get her pink...

An Exhibition by and About Hermès Showcases Process and Precision