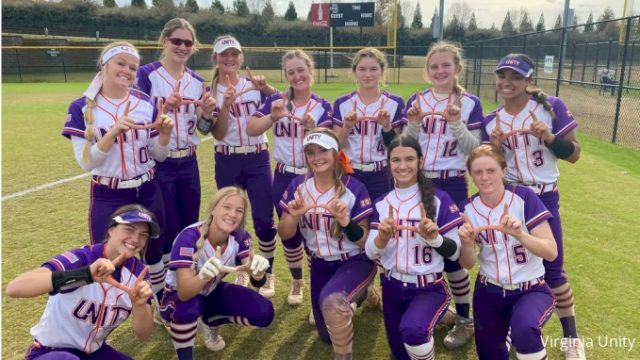 Jayden Heavener, a Virginia Unity 16U pitcher/firstbaseman, has seen more of the open roads than most adults since she started playing travel ball at the 8U levels. The lefthander, aged 5-7, plays for Pace High School in Florida. She travels all over the country with her travel team and takes hitting and pitching lessons once a week.

Jayden’s mother, Denise, estimates she and her husband Shane have logged about 20,000 miles by car this year alone, getting their daughter to her various softball activities. They’ve lost track of the mileage racked up by air.

“It’s much different now than it was then,” Denise explained.

“Jayden travels all over the United States, whereas they were mostly within two or three hours.”

Still, no one’s complaining. Born in Nashville, Jayden and her family moved to South Florida eight years ago as a result of Denise’s job. As Jayden’s softball skills began to develop, the family decided to relocate to the Pensacola area to put her in the best position for practices and private instruction.

“It was a decision that was not hard to make because honestly, she was worth it and had the talent,”Denise said. “We owed it to her to provide that.”

Jayden considers the chance to travel to new places and experience the perks of playing the game one of the best perks.

“I love the game and would go anywhere for it,”She said.

“I love traveling and playing in different states, going all the way to the West Coast, just getting in as much practice as I can.”

Jayden’s love of softball began when she was four. She started as a catcher and played for Tennessee Mojo 8U. She was limited in her playing time and decided to try pitching. After speaking with her parents, she joined the circle at age 10, and she knew this was where she belonged.

“I didn’t have the mental game then (as a catcher),” Jayden said.

“It frustrated me but it also pushed me to be better. Me and my parents talked about being a catcher or pitcher. I really wanted to do both, but I had to choose. Being a lefty and (seeing) how strong I was pitching, we felt like it was a better idea.”

Jayden regularly practices with Shane, a former college track and field athlete. Shane laughs as he recalls the many bruises that he has received from catching Jayden. Instead of assuming a catcher’s crouch, he sits on a bucket.

“I’ve done it since day one, and she calls me her bucket man,”Shane said.

“(The bruises) don’t feel any better. I learned to protect myself a little better behind catcher’s gear.”

Jayden was a member of the Birmingham Thunderbolts for three years. It took Jayden some time to build the confidence and mental toughness necessary to be an elite member in the circle. Slowly, success began to dawn. After struggling during the first half of the 2019 PGFNationals, she won back to back complete game wins against Impact Gold to lead her Bolts to victory.

“The people around me believed in me,”Jayden spoke of her time spent with the Thunderbolts.

“The coaches and players pushed me to be better. I’ve always loved the competition of the game, and there’s always something to change and correct.”

One of Jayden’s greatest challenges came in 2020. After experiencing pain in her lower back, it was discovered that she had suffered a L4 stress fracture. She would have to miss several more months. She worked hard to get back.

“They don’t really know how it happened,”Jayden recalled the injury.

“I recovered a lot faster than I thought I would, even though it was a while before I could come back because I couldn’t work out. It was supposed to happen, and it made me grow stronger and learn to have more love for the game.”

Jayden spent hours in the gym after being cleared to resume her workouts. She also used CrossFit to increase strength.

“I’ve found CrossFit was good for my endurance as a pitcher and I’m not lifting too much weight,” Jayden explained. “I’ve found it really fun.”

Jayden was a Pace High School freshman in 2021, and she proved her resilience. After one of the team’s pitchers suffered an injury, Jayden stepped in. Jayden posted an 11-3 record, with a 1.57 ERA. She also had 252 strikeouts in 114 innings. She was a.303 hitter at the plate, leading Pace to the state Final Four. This success earned her the Florida State 5A Pitcher of the year award.

Her sophomore season was even more successful with 16 wins and a 0.90 ERA. She also had 300 strikeouts. She slugged.391 with eight homers, and was named to the 2022 MaxPreps Underclass All-American Team. She pitched a no-hitter with 17 strikesouts and hit a 2-run homer in an 11-inning win over Orange City University High. This sent the Patriots to the state semifinals. They lost to Melbourne High.

“We’ve had the same girls those two years, and I felt like it was time to go a bit further because we’ve had those extra steps to work with each other,” Jayden said. “We just lost it (in the semifinals).”

Jayden joined Virginia Unity 16U last fall, coached by Jay Ross and Josh Johnson. Her parents enjoyed the Thunderbolts as well as the relationships they had made, but she felt it was time to take on a new challenge. Johnson was impressed by her calm and professionalism in the circle. She had previously made several guest appearances with the Thunderbolts.

“I felt like from a competitive standpoint of being able to put her in situations to be more successful… I could help her through the process of being recruited and chasing her dreams,”Johnson stated.

Jayden will be able begin talking to coaches this September, as she begins her junior years. Denise owes a lot of credit for Jayden’s preparation for this process to Johnson and Ross.

“We are trying our best to give her advice without pushing her in a certain direction,” Denise explained. “Jay and Josh have been so amazing in that process. They are her biggest supporters and fans as far as talking to coaches for her and trying to find a perfect fit. We’ve just told her to follow her heart, choose a school that’s academically appropriate but what feels most like home.”

Jayden hopes to study veterinary medicine once she graduates from college. Jayden loves animals and spends time with her two dogs, an English Bulldog and a chocolate lab. For now, she’s focused on the present and working toward getting better as a pitcher and a hitter.

Jayden wouldn’t mind being a two-way player in college should that opportunity present itself. It’s a tall order, to be sure, but one Johnson believes she can handle.

“The coaches I’ve talked to about it are all in favor of it for her,”Johnson stated. “She’s got some juice in the bat. She’s not a singles hitter, so you don’t have to worry about her running bases. Typically when she gets on, it’s going to be a double or home run. She’s a Power Five starter from day one.”

Ariel Rose - September 14, 2022 0
As summer ends, it's time that you start changing your wardrobe from breezy warm-weather looks into cozy fall outfits. It can be overwhelming...

Hailey Bieber opens up on ‘fashion anxiety’ and love for Princess...

Meet the Bayonne blogger, influencer, and small business owner with a...