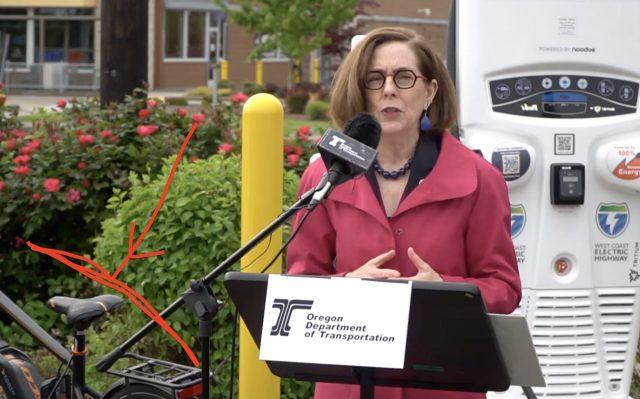 (Images of Tuesday’s press event in Woodburn provided by ODOT. Click to view the full image with captions.

“Community feedback has influenced our thinking and direction around e-bikes.”
— Matt Noble, ODOT

Kate Brown, Oregon Governor spoke out about climate change at a press event in Woodburn on Tuesday. The occasion was to mark a milestone in Oregon’s efforts to build out its portion of the West Coast Electric Highway — a network of charging stations between Canada and Mexico that aims to relieve range anxiety and further bolster the switch to electric transportation.

As regular readers of this website will know, conversations about EV charging almost always revolve around electric cars. This event was very different. In fact, in video of the event, I couldn’t even see a car in the frame. However, I was able to see a different type vehicle parked next Governor Brown: a bike.

Why? All 44 Electric Highway charging points currently open in Oregon have a 110 volt outlet that provides free charging for electric bike and other types of EV users. ODOT has heard our pleas and they’ve responded!

The chargers are located along I-5 and I-84, U.S. 101 and a few other highways. Once the final phase of the Electric Highway is completed in Oregon later this fall, there will be a total of 47 stations available — and all of them will include an outlet for e-bikes. (Find station locations here.)

EV advocacy group Forth provided the bike for Tuesday’s event.

ODOT’s share of this project will be $4 million when all is said and done — just one part of the state’s $100 million commitmentto EV charging infrastructure. When we reported on that investment two weeks ago we hinted that ODOT had plans to address e-bike charging needs, but we weren’t aware they included all stations along the Electric Highway.

Since December 2020 when we raised concerns that their transportation electrification plans were too heavily geared towards cars and seemingly left out bikes altogether, the agency has come a long ways.

E-bike riders, like Shawne Martinez, must search for public outlets in businesses or other public spaces to charge their bikes. They also need to purchase special adaptors that can be used at standard car charging stations.

These improvements to include a bike outlet is a small but significant sign of progress and help to level the playing fields for bike and car users.

Matt Noble, ODOT spokesperson, confirmed that it was more likely because our community spoke out. “Community feedback has influenced our thinking and direction around e-bikes. Whether that’s through reporting like yours or through direct engagement like our recent TEINA study.”

Noble also shared that because e-bikes and micromobility vehicles were already on ODOT’s radar, it made this upgrade to chargers by their private contractor EVCS possible. “When we were negotiating the details of the upgrades,”Noble said. “The idea to add the 110 volt charging for e-bikes was a no-brainer and something we both supported. EVCS took the extra step to provide it for free.”

ODOT, thank you for your attention! We hope future EV charging projects will continue to consider the needs of electric bikes (and scooters and skateboards and other small, low-impact EVs) users.

Contact us at @jonathan_maus on Twitter, via email at [email protected], or phone/text at 503-706-8804. Please consider becoming a supporter if you enjoy this site.

Ariel Rose - July 1, 2022 0
These items were taken from the Niles Police Department Bulletin. An arrest does NOT constitute a finding or guilt.DUIVadim Djiouk, 55, from the...

School’s out for summer in classic fashion