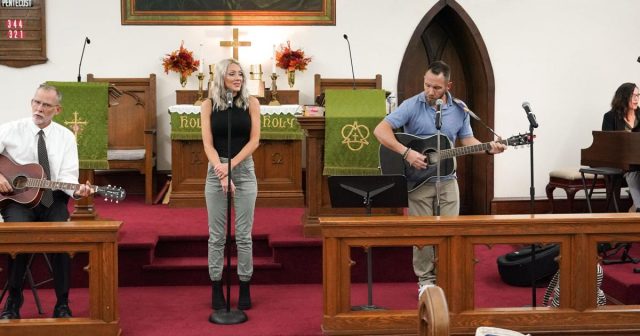 Phil Shober is a man who sets out to do something.

It was just over a decade since Shober and Gerri opened Denver’s first Grace House sober living house. It happened again two years ago, when he retired at 60 from a life of banking to become a pastor at St. Paul’s UCC Church in Bowmansville. This year, Shober set out with a group of musicians — each of different skill levels, and some family and friends — to record an album of original songs that combine the ideas of religion and redemption.

He did the same.

“I had a couple of ideas initially,” Shober says. “The first song we did on the album was ‘Sweet King,’ and I had this idea and I was almost embarrassed by it. I didn’t even know how to go about writing a song. I had this idea for a tune and I had the words and jotted it down. I started to talk to Bri (O’Connell), the singer and said I had an idea, but I didn’t know how to convey it. She said, ‘Well, why don’t you play it, sing it for me?’ It was embarrassing because I’m not a singer, but I had to convey it to her.”

Shober began playing the guitar as an infant. “Sweet King”This was his first song. Now, it’s featured along with nine other original tracks on “Turn the Page,”An album that captures the triumph over recovery in song. The album was released on August 31st and can be found on streaming services like Spotify and Amazon Music.

Grace House was founded in 2010 by the Shobers after their daughter Grace had a difficult time with heroin addiction. After failing to find a suitable house, the Shobers decided to start their own house for women who had just finished rehab and needed a place to regroup. The Shobers noticed a lack in spiritual presence in their recovery process in 2016, so they started a mini church service at the Denver Grace House every Sunday. “Grace House Blessings.” Eventually, the service moved to St. Paul’s, where it has been for the last few years.

It was at these services that musicians, such as Anna Fortuna and O’Connell began to appear and plant the seed in Shober’s head.

Aaron Rucker, a Chicago native and son of a preacher, is another musician. He was once addicted to opiates and struggled to get out of bed at times. Through friends at Alcoholics Anonymous, he learned of Grace House Blessings and began attending services, eventually getting up on guitar and vocals on Shober’s songs.

“With church musicians, you can sometimes have people that should be making six figures a year playing music, and sometimes you have people that are rather novice and just picking up an instrument for the first time,” Rucker says. “It was great collaborating between skill sets and getting a sound that doesn’t interfere with an environment of worshipping a creator, where the music doesn’t get in the way and can serve as a conduit for people to worship.”

Dana Cullen, a musician, moved back to Berks after playing French Horn with the San Antonio Symphony for several years and as an understudy for the Dallas Symphony. Cullen, wanting to get reacquainted with a faith that she never felt all the way connected to, found the services at St. Paul’s to her liking. A lifelong professional musician, it didn’t take many services to get the wheels in her head turning.

“The church setting is a really safe space to kind of do whatever you want, because people are going to love it,” Cullen says. “Something that I really appreciated is that I was in such a high-level, high-stress level of music performance, so to be able to come here and have people appreciate whatever I have to give, that is really special for me.”

Over the course of two years, Shober primarily collaborated with Fortuna and O’Connell to flesh out his songs, at first promising to stop at three, then four, before eventually compiling 10 songs for the album.

Songs are often accompanied by a strumming acoustic guitarist, with vocals and piano accompaniment. Songs such as opener “The Chains of Our Making”And “Every Means Every”are singing songs about the power of love as a tool to help you recover. Other than a few songs, you can also like “Sweet Jesus, Amen,” the messages in the songs are general enough that a listener could glean whatever redemptive passage they’d need without necessarily being either in recovery or overtly religious.

“It occurred to me late in the process that — and I’m a Christian, I love Jesus, all that — none of the songs mention the name Jesus, and yet they were all kind of about Jesus in my mind, in a way,” Shober explains. “And then I had this dream that led to the song, ‘Sweet Jesus Amen,’ and then boom, that took care of the problem.”

The bulk of the album was recorded in two long sessions, one in March and another in June, at producer John LeVasseur’s Sound Design Studios in Manor Township. Some songs were not finalized due to scheduling difficulties. Shober was able two of his children, Ross, and Grace, to join the project.

“Our son, Ross, is a major and pilot in the Air Force stationed in Florida,” Shober explains. “He was going to be home for our other daughter’s wedding in June. He’s a drummer but hadn’t played in a decade. He was excited about the project, so he wanted to be the drummer.”

And, of course, it couldn’t be “Grace House Blessings”Grace is not here.

“I wanted to get Grace involved, so a little later in June, we brought Grace in to do background vocals,” Shober says. “I wanted her on the record and to be part of it. I always say, ‘You’re Grace! You have to be a part of it!’”

With the album completed, the Shobers are now looking into other distribution options. The majority of the band that recorded it is at Sunday mass, playing a mixture of Shober originals and related songs. All who were asked say that they’re happy to keep the music going.

“An opportunity to take part in something that is recovery-based, I have a hard time saying no to it because of where I’ve been,” Rucker says. “Music is a phenomenal medium to reach people that may have a hard heart, that wouldn’t necessarily be reached by someone else’s experience. It’s a language that you don’t have to have spoken before to understand.”

For Shober, it’s all about the “kids,” as he calls them — not just his own children, but the musicians who helped bring the songs to life and continue to spark new musical ideas to this day.

“We count our blessings, and that’s what it’s all about — Grace House blessings, it really is,” Shober says. “And believe me, our church is not — I don’t scream at these ladies like, ‘You must accept Jesus Christ!’ We’re laid back, we love people to come to church, and we want them to be loved. We want people to feel the love, and that’s it. And hopefully that comes through in the songs.”

Success!An email was sent to you with a link for confirmation.

Are hot flashes giving you nightmares? Temperature-regulating outfits could be key...

Christine Stagnitta for the New York Style Magazine – a Day...