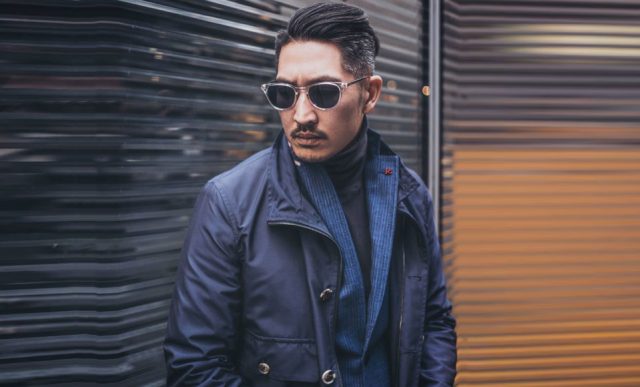 Melbourne, you unpredictable wildebeest. Whilst locals worship it as Australia’s epicentre of fashion, food and art, they often forget that it’s also near-impossible to dress accordingly for thanks to its notorious four-seasons-in-a-day.

Accepted. We hit up stylist Jeff Lack to find out exactly how men should dress for Melbourne’s sporadic climate. It’s not about wearing more or less, but being strategic with layers so that you’re equipped to take on anything from a cold snap to a mild heat wave without looking out of place.

One Colour to Rule Them All

“Known for it’s many varieties of black clothing Melbourne is all about elegant, chic styling,”Jeff Lack is the resident stylist.

The idea behind utilising the classic hue is reflective of the city’s thriving culture which allows men to combine looks without trying too hard – similar to the cool cats of New York City without the pretentiousness.

“Even when colour is added, black underpins the ensemble.” – Jeff Lack

“Even when colour is added, black underpins the ensemble. White, cement and tan are often accomplices,”Adds Lack

“Layers are very important as the weather changes so rapidly, you must be prepared.”

So take a leaf out of Melbourne’s classic style heritage and try some of these pieces this season. It’s guaranteed to get you through whatever the city throws at you.

For any man who is going to Melbourne, sneakers and boots are essential. Chelsea boots have never been out of fashion. They can also be used as a barrier to protect against rain or cold snaps.

Remember though, if you’re going for suede boots be sure to scotch guard them real good to prevent scuff marks and water soiling the material.

Sneakers are also a no-brainer as they provide spades of versatility when paired with a more streetwear aesthetic – think joggers, cropped chinos and cuffed denim.

You can beat the transitional weather of Melbourne by keeping your layers light without sacrificing your style.

Sweaters and plain T-shirts worn over each other are a enough to get the job done and they don’t even need to be fancy. Monochrome (black & white) is your best friend, but muted greys are also a good choice.

Outerwear to Brave the Elements in Style

Layer up as necessary when the windchill factor increases. The same goes for indoors. Layers can be easily removed with minimal effort, and the look will still be intact.

We recommend that you choose the classic black but other darker colors, such as navy, can also be used.

Leg Warmers in The Denim Variety

Denim may scream as an obvious move for locals, but for others who are more accustomed to board shorts and thongs, it’s a staple garment for all seasons of Melbourne. Black denim bottoms are a good choice, and you have many options for upper garments.

Person arrested at Fashion Outlets of Chicago in Rosemont after gunman...

The Outlet Shoppes at Laredo to host Rock and Shop