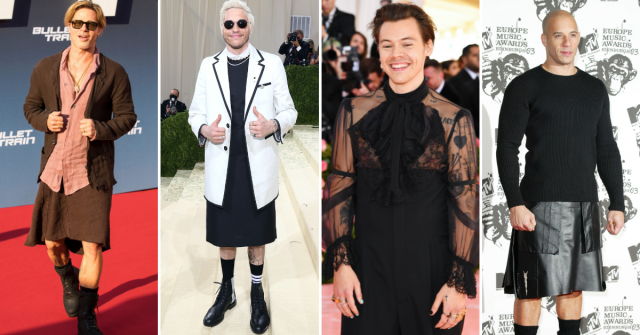 Brad Pitt, Hollywood’s heartthrob, showed that not only Millenials can be comfortable with challenging gender roles by wearing a skirt to the Berlin premiere for his latest movie. Bullet Train.

When asked why he wore a skirt on the red carpet, the 58 year-old replied: “The breeze. The breeze.”

Brad has hinted before at wanting men to feel more comfortable in skirts telling Vogue in 2004: “Men will be wearing skirts by next summer. That’s my prediction and proclamation.”

Brad was promoting his movie TroyHe was clearly attracted to the period’s garments at the time.

“The film answers to both genders. We were going for realism and Greeks wore skirts all the time then,”He said.

Brad is not the only Hollywood actor to wear a sleeveless skirt.

David Beckham was just after getting engaged with Posh Spice Victoria in 1998, and at the height of his footballing career, was mocked because he wore a sarong.

“Sarongs are great. That’s one thing I never regret because I thought it looked great and I would still wear it now,” he told ITV in 2014.

Some of the most fashion-forward men have actually shown how great a man can look when he wears what he wants, rather than what he should.

Harry Styles, a former member of a boy band, singer, actor, and model, doesn’t have the time to be what people want. He is too busy being himself.

“As a kid I definitely liked fancy dress,” he told Vogue.

He was cast in a school play as a church mouse. “I was really young, and I wore tights for that,”He recalls, “I remember it was crazy to me that I was wearing a pair of tights. And that was maybe where it all kicked off!

“There’s so much joy to be had in playing with clothes. I’ve never thought too much about what it means—it just becomes this extended part of creating something”

The star was all tattoos and Gen Y sexuality as Josh in the TV series Younger, but Nico is in an open polyamorous relationship with American lifestyle entrepreneur Bethany Meyers and they each consider themselves gender fluid.

And maybe they are!

He plays tough guy Dominic in the Fast & Furious franchise but that doesn’t mean Vin is afraid of the breeze.

The action hero rocked a leather skirt at the MTV Europe Music Awards in 2003.

This was probably him paying homage to Scotland’s national dress given the event was held in Edinburgh, but the leather twist on the kilt definitely blurred some lines.

The eldest child of Will Smith and Jada Pinkett-Smith, Jaden, has been given more freedom than many children his age.

And fashion is one area in which Jaden chooses to express himself.

In fact at just 18, Jaden was the first male model to model women’s wear for the French label Louis Vuitton.

Actor and Saturday Night Live alum Pete Davidson may be dating a Kardashian but he’s not afraid of pushing stereotypes when it comes to what he wears.

“I’m excited for how easy it is to pee. You can literally just lift it up,” he told GQ magazine about wearing a tunic to the 2021 Met Gala.

“If you’re gonna wear a dress, what better way or place to do it than the Met, you know?” he added, “I’m really excited and really stoked that they thought I could pull this off, which is hilarious.”

He’s dated some of the hottest actresses in Hollywood including Cameron Diaz, Scarlett Johansson, Lupita Nyong’o, Katy Perry and even our very own Isabel Lucas, but actor Jared Leto has never been afraid of wearing a skirt.

British actor and comedian Eddie Izzard, known for playing Roman in Ocean’s Twelve and Ocean’s Thirteen and Peter Solomon in Dan Brown’s The Lost Symbol TV series but in her personal life, Eddie is comfortable with who she is.

“I wear whatever I want whenever I want. I don’t call it drag; I don’t even call it cross-dressing. It’s just wearing a dress,” Eddie declared to Interview magazine in 2014.

Eddie has since come out as gender fluid and says she’d prefer to be known by female pronouns.

Pose actor Billy Porter has loved playing with fashion stereotypes over the years.

“I used to get frustrated that women could wear whatever they wanted and men had to show up in the same penguin suit,” he says.

“My goal is to be a walking piece of political art every time I show up. To challenge expectations. What is masculinity? What does that mean? Women show up every day in pants, but the minute a man wears a dress, the seas part,” he told Vogue in 2019.

Let’s hope one day people can just wear whatever they like and not have fashion labelled for one particular gender or the other.

Or if you have a story idea, email us at [email protected].