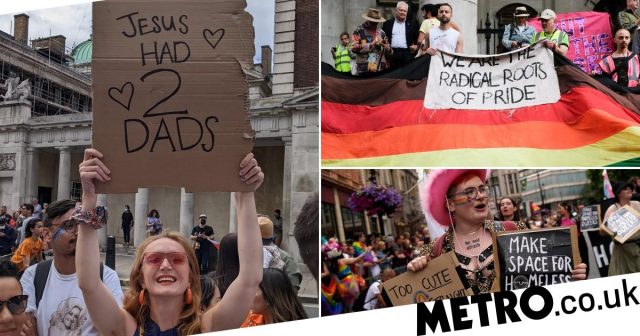 A host of stars might be performing at this year’s London Pride, but we know it’s your signs and outfits that low-key stole the show.

Over a million people descended on the capital today for the 50th anniversary of the first ever march.

The sky turned rainbow-coloured as LGBT+ people, allies, activists, politicians, bikers, celebrities and even dogs marched through the capital for the first time since the pandemic.

Metro.co.uk is at the scene speaking to people about why the event is so important (and sussing out the very best outfits and signs on display).

In a defiant message to religious zealots, one banner said: ‘If God hates us why are we so cute.’

A third brandished a flag which simply told haters: ‘F**k off’.

Other signs carried inspirational messages about inclusivity and being yourself.

One person wore a t-shirt which said: ‘The only choice I made was to be myself.’

Another donned a Harry Potter-themed top which said: ‘No one should live in a closet.’

The march was led by Gay Liberation Front (GLF) activists who organised the very first Pride parade in the UK 50 years ago.

Some held placards saying ‘I was there in 1972’ and that they are ‘still fighting’ for global LGBT+ freedom.

Peter Tatchell, a GFL veteran, gave a rousing speech calling on the UK’s largest Pride event to return to its radical political roots.

He said in the early days of Pride marches, people were not only campaigning for equal rights for the LGBTQ+ community but also wider social change.

Many people heeded the message, branding signs in solidarity with other marginalised groups.

There were several placards calling for an end to Priti Patel’s controversial Rwanda deportation policy.

Other issues raised during the protest include the government’s refusal to ban trans conversion therapy, the wage gap and the lack of safe spaces for homeless people.

Others raised awareness about countries where it is still illegal to be gay.

Mohammed Nazir, 24, from Bangladesh, from campaign group Rainbows Across Borders, said he wanted to dedicate this year’s pride to those forced to still hide their sexuality.

He said: ‘Pride is about self-affirmation, dignity and equality. It is a way to meet some other LGBTQ people. Pride is a movement where we’re still fighting for our rights.’

Protesters also hit the streets in defiance against Vladimir Putin, calling for the Russian tyrant to end his bloody war in Ukraine.

Many refugees from the war-torn country attended the march, with one sign saying: ‘Ukranian Queer and Brave.’

Some signs mocked Putin, who has suppressed the rights of LGBT people in Russia.

Other signs carried more serious messages about the war.

‘If you stand for freedom, stand for Ukraine’, chanted a row of demonstrators, holding placards reading: ‘Peace for Ukraine, trial for Russia’, and ‘I was raped in Bucha’

There was a large turnout from the Labour party, including leader Sir Keir Starmer, deputy leader Angela Raynor and London Mayor Sadiq Khan.

Mr Khan said there was still a ‘danger’ to the LGBT+ community of ‘discrimination, bias and violence’ and warned against being ‘complacent’.

He gave a speech as the London Gay Men’s Chorus, which was taking part in the march, described an assault on one of its members and his partner in the early hours of Saturday as a ‘terrible attack’.

A man was arrested by the Metropolitan Police on suspicion of causing grievous bodily harm in what the force said it was treating as a homophobic hate crime.

The choir said the attack ‘only serves to underline how important it remains to fight against homophobia and all forms of discrimination’.

To view this video please enable JavaScript, and consider upgrading to a web
browser that
supports HTML5
video

Mr Khan said: ‘This year is the 50th anniversary of Pride, celebrating this community, celebrating the progress made, but also continuing to campaign and never be complacent.

‘We saw this time last week an attack in Oslo just hours before that parade, where two people lost their lives and more than 20 were injured.

‘So, we’ve got to be conscious of the fact that there’s still a danger to this community of discrimination, bias and violence. But allies like me are really important to support this community.’

For more stories like this, check our news page.

This year marks 50 years of Pride, so it seems only fitting that Metro.co.uk goes above and beyond in our ongoing LGBTQ+ support, through a wealth of content that not only celebrates all things Pride, but also share stories, take time to reflect and raises awareness for the community this Pride Month.

And we’ve got some great names on board to help us, too. From a list of famous guest editors taking over the site for a week that includes Rob Rinder, Nicola Adams, Peter Tatchell, Kimberly Hart-Simpson, John Whaite, Anna Richardson and Dr Ranj, as well as the likes of Sir Ian McKellen and Drag Race stars The Vivienne, Lawrence Chaney and Tia Kofi offering their insights.

During Pride Month, which runs from 1 – 30 June, Metro.co.uk will also be supporting Kyiv Pride, a Ukrainian charity which was forced to work harder than ever in order to protect the rights for the LGBTQ+ community during times conflict, and youth homelessness charity AKT. Click here to learn more about their work and how you can support them. here.

For Metro.co.ukClick here for the most recent Pride coverage.

Get everything you need
Latest news, analysis, and feel-good stories.

Ariel Rose - October 23, 2022 0
Drapes literally have come down on a well-known dinnerware brand, and a women’s fashion clothier is shuttering less than three months after announcing...

2021 Soul Train Awards: The Different Layers Of Style And Swag...

From buying house employee to owner of industrial group

One Kansas City man has dedicated his life to the dying...