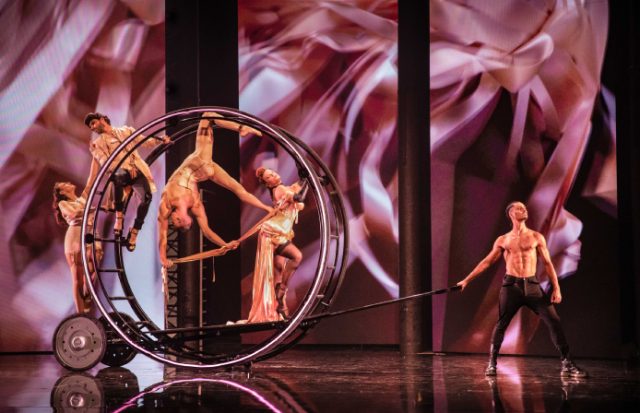 We caught the Fashion Freak Show experience at the Southbank Centre’s Queen Elizabeth Hall back in 2019, when it made its London debut following its premiere in Paris. It’s back three years later and in a new setting, the Roundhouse, Camden. We enjoyed it back then, and we enjoyed it again now – most of the content of the production remains the same, although it has been adapted to the new space, complete with a catwalk which is utilised effectively throughout.

It’s also a bit more of an immersive experience this time around – the performers often exit the catwalk into the auditorium, interacting with those at the cabaret tables or the front rows of the stalls on their way back to the stage. If you’re not a fan of audience participation, perhaps book some seats a few rows further back.

The Fashion Freak Show is unlike anything else on London’s stages right now – it offers a look back at the last 50 years of pop culture, viewed through the eyes of fashion’s enfant terrible. It is described as “The Fashion Freak Show”. ‘an explosive combination of revue and fashion show’ and we wouldn’t argue with that description: it’s part musical revue, with a number of the songs – from a soundtrack curated by Chic’s Nile Rodgers – performed live. It is, of course, part fashion show; but there’s also some energetic choreography and entertaining acrobatics thrown in too, not to mention some amusing pre-recorded content.

It works well. There’s not a huge amount to the narrative other than an overview of Jean Paul Gaultier’s career, with a handful of behind-the-scenes snapshots, so those after something a bit more substantial will be better off looking elsewhere. It’s not surprising that this show is about fashion. The focus is on the aesthetics, which are quite pleasing. Over the course of a couple of hours we’re treated to a wide variety of genuinely spectacular looks, and are afforded a handful of glimpses into some (carefully choreographed) backstage chaos.

We’re aware that a show with such a focus on fashion won’t hold universal appeal – and while both the singing and dancing are pretty solid, they’re not the best on offer in London at the moment. It’s also very much an all-surface, no-substance show… but it’s very rare for the surface to look quite this astonishing. The Fashion Freak Show is unlike any other experience on offer at the moment and it’s spectacularly stylish; energetic, fun, sexy, unique – it’s all the things a fashion show should be.

Ariel Rose - October 9, 2022 0
Fashion trends change with the seasons. And if you’re anything like me, it’s hard not to want to buy everything you like. While...

Style Questionnaire for “It’s on Backwards”: The Clothing Subscription Box for...