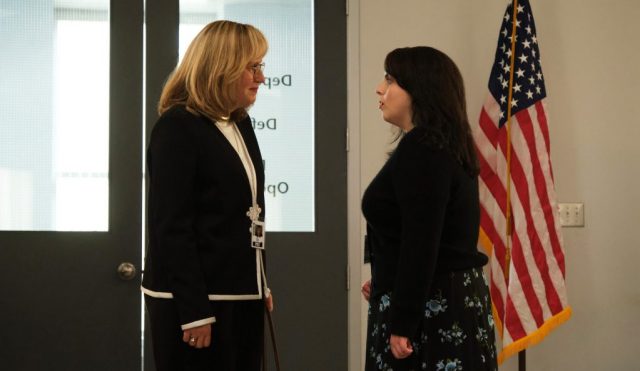 “Impeachment: American Crime Story” costume designer Meredith Markworth-Pollack didn’t meet Monica Lewinsky up to the end of the FX limited-series shoot. From the beginning, Monica Lewinsky, a former White House intern, served as a producer and provided a wealth if photographs, along with detailed notes, and original outfits from her own wardrobe. This includes the sage-green suit she wore when she first met Bill Clinton.

“We needed multiples of the suit, so we ended up making our own, but having the actual outfit made our lives so much easier,” Markworth-Pollack says.

Their collaboration illustrates the creative team’s dedication to accuracy, as well as a determination to reframe the story from the perspective of the women at its center: Lewinsky, played by Beanie Feldstein, who also served as a producer; and Linda Tripp, played by Sarah Paulson, who served as an executive producer. Lewinsky and Tripp were shamed and caricatured in the media during the real-life drama in the 1990s. However, this version throws that dismay into relief.

Markworth-Pollack didn’t simply recreate the iconic looks from the crisis, like the beret Lewinsky wore in her caught-on-tape public hug with Clinton (played by Clive Owen). She scoured official White House photos, news footage and paparazzi shots to determine what characters would’ve been wearing on any given day and studied the general styles worn in Washington, D.C. in the ’90s, as well as rules of dress for White House and Pentagon employees.

“We all have certain preconceived ideas about ’90s fashion, especially regarding the boxiness of men’s suits and women in skirt suits with shoulder pads,”She says.

Markworth-Pollack replicated the outfits with precision by sourcing from online marketplaces (she was particularly obsessive about Clinton’s ties) or creating them from scratch. Edie Falco played Hillary Rodham Clinton.

Jamie Walker McCall was the head of the art department and was also a historian. Some items, including podiums and anchor desks, were constructed from scratch. But Kimberly Wannop set decorator was able rent or buy most of the furniture and set dressing from prop shops, antique stores, and ecommerce sites.

“Although a lot of the West Wing furniture is used in every administration, things in their private residence, like their bedroom and sitting room, were very specific to their personal taste and the period, so finding an almost exact sofa to match what they had in their bedroom was a true treasure,”Walker McCall:

“Impeachment”Several real Washington, D.C. exteriors were used (including Pennsylvania Avenue an apartment complex associated with Watergate), but the nation’s capital was primarily portrayed by Southern California locations, from Pasadena and Downtown L.A. to West Hollywood and Malibu. Other than interior sets being shot on location in D.C. some were also built in North Hollywood. Others were built in a warehouse on the Fox Studio Lot.

Walker McCall was given specific design details by Lewinsky regarding the Watergate apartment she shared, with Marcia Lewis, her mother (portrayed by Mira Sorvino). However, Walker McCall understood that some liberties were necessary to ensure film-friendly settings.

“The goal was always to portray an accurate depiction of Monica’s history as best we could without making it look like a historical documentary,”Walker McCall says.

Less was known about the interior of Tripp’s Maryland home, but Walker McCall made sure it was true to Tripp’s personality. She took a typical Northeast suburban home design and made it her own by adding antique colonial furniture, a custom mural in her dining area, and a formal living space that showcased her intricate miniature Christmas village during holidays.

“Linda was someone who had a lot of personal pride in herself, the clothes she wore and her commitment to her kids and her country, so it was important to make her house reflect that,”Walker McCall.

Ryan Murphy, executive producer, stated that he wanted to create a new type of concept during initial meetings. “Impeachment”it felt like a 1970s thriller. Walker McCall painted the walls of each set with a mural that reflected this feeling. “vignette” effect, fading the colors into darker tones at the edges, and director of photography Simon Dennis’ moody lighting reinforced the look.

Markworth-Pollack effected a different fade to darkness with Hillary Clinton’s wardrobe over the series, shifting from bright colors in the early scenes to outfits favoring navy, black and brown as she realizes the true nature of her husband and Lewinsky’s relationship.

“She’s becoming a little more austere, just a little more serious and kind of mimicking the tone that was setting in at the White House,” Markworth-Pollack says.

The series’ moody ’70s aesthetic was epitomized by the Pentagon offices where Tripp and Lewinsky forge their unlikely friendship: a cavernous, high-ceilinged space dominated by gray and off-white, with occasional touches of beige. The set — a rare instance where production didn’t attempt to accurately re-create the real-life location — provides a stark contrast to Tripp’s previous workspace in the West Wing, where Walker McCall emphasized It is decorated with warm colors, rich woods, and brass to make it feel prestigious and comfortable. It not only visually emphasizes that Tripp is now just another federal worker, isolated in a vast sea soul-sucking cubes, without prestige and importance, but it also helps to create sympathy for a character some might consider irredeemably abrasive or disloyal.

“There’s this great moment in Episode 1 where Linda lands in her cubicle and looks around and you feel her human despair to be in this place,”Says “Impeachment”Sarah Burgess is the showrunner, executive producer, and writer. “I really feel like that design helped tell that story.”

4 Times Janhvi Kapoor and Khushi Kapoor showed us how to...

Pictures: Irish celebs get glammed up for the VIP Style Awards...

Ariel Rose - July 23, 2022 0
We use affiliate links. We earn commissions if you make a purchase through the links on this site. Learn more.REVIEW – A...