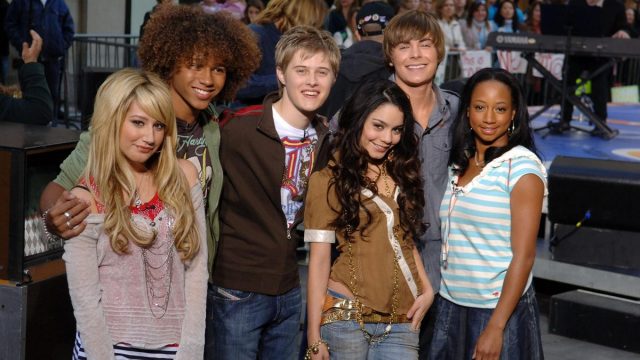 I wish I could capture the excitement of settling in to watch the latest Disney Channel Original Movie on Friday Jan. 20, 2006. I had just finished a day of eighth grade. I was probably weeks away from making the basketball C-team. Low-rise jeans were in style, and I wouldn’t get the lead in the musical because I wanted to take band instead of choir. Necklaces were layered and long enough to tuck into your jeans. I had just finally gotten a hair straightener and started burning my poor wavy strands.

I desperately wanted to grow up, but I also never wanted to miss a new Disney Channel Original Movie. From the first duet at the ski lodge, I fell in love with High School Musical—and apparently so did everyone else. Nearly 8 million people watched it with me that Friday night. It spawned three movie-length sequels, a stage adaptation and a mockumentary television series that gave us the talented Ms. Olivia Rodrigo.

And now, I am being teased by the original films stars.

First, three weeks ago, Vanessa Hudgens posted this photo to Instagram. She’s at East High, wearing a rosary that sort of looks like a T. For Troy???

Then, today on a slow news FRIDAY, Zac Efron posted this:

How could I forget a time when in my life when everything was much simpler? I wasn’t out. I hadn’t gone to high school yet or gotten my heart broken. I hadn’t even been told I was terrible at basketball yet.

The sartorial vision from that time is back with a vengeance. Low-rise jeans They have begun to make hip bones more visible. Baby tees and microskirts, which less than one percent of the population can really pull off, are showing up on Vanity Fair covers and TikTok. I cannot seem to escape the fashion of the aughts, so it’s only fair that I get to return to one of the defining pieces of art from that time.

In short: If you guys are fucking with me, now is a really bad time to do that. I am desperate for whatever you are teasing.

How To Dress For A Heatwave Like Emily Ratajkowski

Ariel Rose - July 18, 2022 0
Emily Ratajkowski’s style is all puffer jackets and trackies in the winter, but come summer, she’s inclined to show a little more skin....