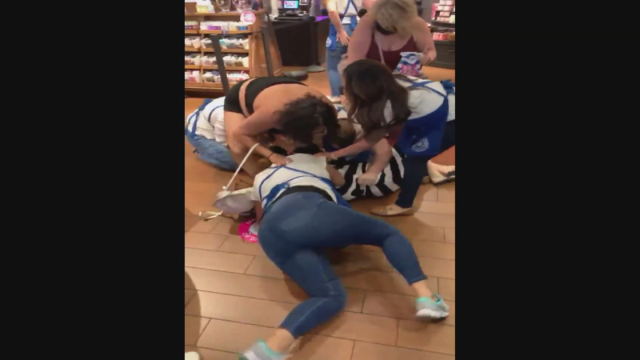 A victim tells us about what happened before the brawl in a Bath & Body Works video that went viral.

Scottsdale Police Sergeant. Kevin Quon claimed that the fight started because of someone cutting in line.

Genevieve Denslow tweeted the video, which shows a customer fighting with an employee. Other employees then jump in to stop the fight but it escalates into a large brawl.

Denslow was shopping with her mom when she saw the chaos in the soap-and-lotion aisle.

“It all escalated very quickly,”Denslow. “It was just arguing at first and then out of nowhere – you could just see other customers in store that had nothing to do with it in first place then employees trying to get customers out and everyone on the floor.”

The woman who shot the now-viral video capturing a fight between two ladies at Scottsdale Bath & Body Works explains her reasons for taking video and her reaction to the video’s millions of views.

Scottsdale police informed Arizona’s Family Monday afternoon that Briana Johnson, 25, and Johlyn O’Daniel, 45, were issued for disorderly conduct and assault. Both were allegedly involved with the fight at the check out line.

Social media posts claimed the fight was motivated by racism or COVID-19, but Scottsdale police have not found any evidence to support these claims.

“I just posted it on my Twitter account because I thought it was funny and crazy that it happened and now everyone is messaging me about it. I didn’t expect something like this,” said Denslow.

Her video went viral, and has been viewed millions of times around the globe.

She also said that the police arrived quickly and things calmed down quickly.

We are deeply disturbed by the incident at one our stores. We are currently investigating it in partnership with local police.

Count down the new year in style in Las Vegas