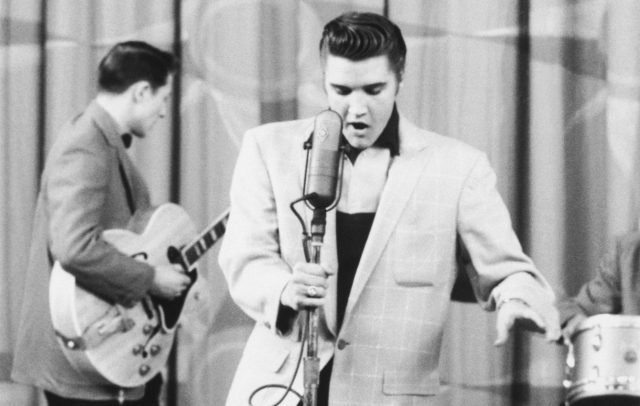 From Alex Turner’s greased-back hair to the louche cool of Harry Styles, Elvis’ impact on fashion is undeniable. He was first styled in the 1950s by Bernard Lansky, owner of Lansky Bros – the Beale Street clothier to Johnny Cash, B.B. King and Jerry Lee Lewis – and it was a close creative relationship that continued for three decades.

Bernard’s son, Hal, now carries the torch for the Lanskys (their shop is currently located in Memphis’ Peabody Hotel), so we got him to talk us through some of Elvis’ most memorable looks (and offer tips on how to nail each outfit).

“Elvis looked his best when he was young, innocent and a rising star. He loved black and pink colour combinations. At that time, men didn’t wear pink, and we take credit for putting him in that colour. One of the most famous examples of that is when Elvis performed ‘Hound Dog’ on The Milton Berle Show in a bubble-gum jacket.”

How to do it: “Add some black and white spectator shoes. You’ll be looking sharp.”

“In the 1950s, Elvis wore a lot of tapered pants which were wider at the top and went down to a peg; his shirts had camp collars. One of his iconic looks was the Hollywood Coat that he wore in the movie Jailhouse Rock, striped with a black velvet collar.”

How to do it: “You gotta be in your best shape, because those clothes are all about tight fits.”

“In his ‘60s phase, Elvis wore a lot of Continental Suits – with skinnier lapels, narrower ties. He looked real trim and good-looking. In the late ‘60s, he mainly sported looks that came out of Carnaby Street in London: loose-sleeved shirts with high collars, bell-bottom pants and shirts with beautiful paisley patterns.”

How to pull it off “A lot of people keep their shirts hanging out which looks terrible. If Elvis was here today, he would never wear his shirt tail out, it would always be tucked in!”

“We did a lot of leather for Elvis. We didn’t actually do his famous ‘68 Comeback Special leather suit, which was by a costumier, but he still looked sensational in it!”

How to do it: “It’s a head-to-toe look. You’ve got to have all the details perfect: from the hair and eyebrows to your belt matching your shoes.”

“One of my favourite photos of Elvis from the ‘70s is where he’s wearing one of our leather coats with a cape on it, and he stopped at a traffic accident to see if he could help the victim. We introduced Elvis to caped shirts early on – we called them our Batman shirts.”

How to pull it off “Keep the colour combinations plain so you don’t end up looking like his Vegas years style!”

The quiff? The leather jacket The rockabilly reinvention of the 2010s. 100 per cent Presley.

Hazza’s hot-pink jumpsuits were only possible because Elvis spearheaded gender-fluidity before it was a thing.