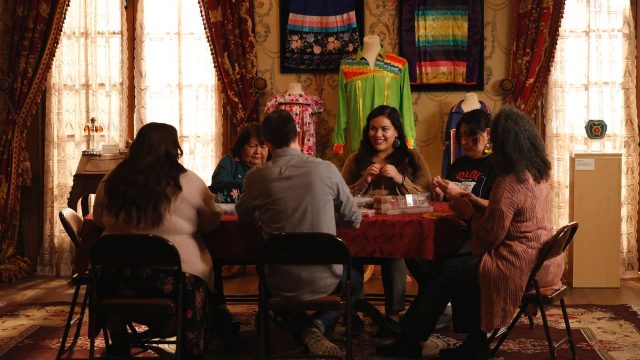 When Rutherford FallsPeacock, which starred Jana Schmieding and Sicangu Lakota, broke new ground by becoming the first mainstream comedy series to focus on Indigenous characters. The story follows Reagan Wells (Schmieding), Nathan Rutherford, (Helms) as their small town grows. “unexpected wake-up call.” We won’t spoil it. While the two friends have their ups and downs, Reagan dreams of managing a cultural center in her hometown. The show’s second season premieres today. It is back with new challenges and more jokes. “We spent a lot of time in season one setting up our world, and making sure that our audience is literate about Native issues and Indigenous history,”Schmieding tells Vogue. “Now, we’re just playing in our world. Every episode has so many more laughs than season one.”

The series will focus on the main issues facing both the fictional Minishonka Nation and the real Indigenous community. ongoing “Pretendians” epidemic(where people pretend they are Indigenous to gain clout). “We have a Pretendian episode, a Halloween episode,” says Schmieding. “We also have lots of Native love this season, which is something that we haven’t seen enough of on TV and film. Every character gets to really shine.” We’ll also get to see Schmieding’s character grow and take on new challenges in her community. For one, she’s been working to build her beloved cultural center, a dream since the first season. “She’s clumsily stepping into her power,” says Schmieding. “She needs to hire a staff, and she’s trying to acquire her own land. She’s experiencing the hurdles and challenges that come with having a bigger voice in her community.”

School of Fashion Design in Boston Patterns an $8M Sale of...

Ian Happ made himself an All-Star. Now Cubs must decide what...