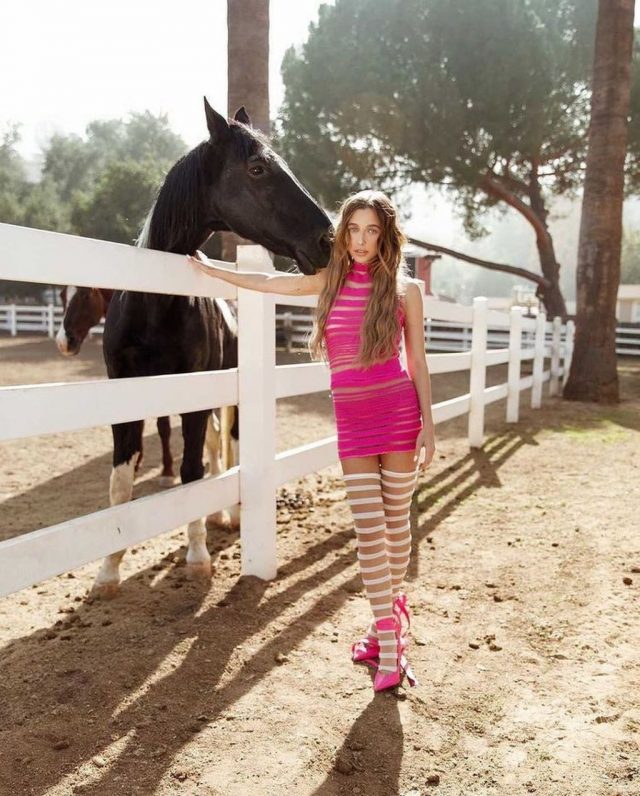 Despite minimal prior design experience and just a few years of fashion school under his belt, George Trochopoulos has become a go-to designer for some of today’s biggest stars.

The 20-year-old London-based designer didn’t initially intend on a career as a fashion designer, having first thought about law or software engineering. He found a safe space and community when he decided to pursue fashion design.

“I was always very creative and very playful, whether that stems from my queerness or that’s something else, I’m not sure,”He explained. “[Fashion designer] was never seen by me or anyone in my life as a job position, but basically I started doing that and playing around. It was the only way in which I saw myself succeeding in a space that I could be myself. It was the only thing that felt right and a step toward the right place. It was never really about the clothes themselves or my fascination with dresses, but it was more about the fact that at the time I really needed a community and the support, which was only given by fashion.”

Trochopoulos studies at the London College of Fashion. He is currently enrolled in the knitwear programme. He came into the program with little experience in designing, having only been exposed to sewing during high school.

After he had completed his first internship and gained his footing, he began sharing his designs via social media. The designer’s signature style is his stripe motif in dresses and tops, which he hand-knits, sews and dyes on his own. He started to build his following on social media by offering the pieces in custom orders last fall.

“It’s a lot of mixed and matched influences in my head kind of put in clothes,”Trochopoulos spoke about his inspirations. “I’ve very obsessed with repeating patterns and seeing how those can be manipulated. So for example, the stripe: it’s something I stumbled upon five or six months ago and I’m still trying to make new ways of doing it.”

Trochopoulos’ stripe motif caught the eye of fashion stylist Jared Ellner, who reached out to the designer to commission a green striped top for his client, YouTube star Emma Chamberlain.

Chamberlain wearing his top became viral because he was in Greece, without any internet or cell phone service. He noticed that he had a lot of social media followers and requests for custom pieces. He quickly built his own website and began to make custom orders.

After Chamberlain, a steady stream of celebrities have worn Trochopoulos’ stripe styles. Kendall Jenner was photographed in a custom knit shirt this summer. Miley Cyrus also ordered a black striped knit gown. Cyrus is wearing the dress in a photo that is on a T-shirt she is selling as part her merchandise collection.

Recently, his dresses were worn at the British Fashion Awards by Deba and Darkwah Kyei – Darkwah.

“I think no matter the style, color, size or texture, I’m very interested in making clothes that make people feel sexy,” Trochopoulos said about his designs. “Especially as a queer person who grew up in a non-queer space in a small town in Greece, it took me a very long time to feel sexy until, let’s say, this year. Sexiness is just something very important to me because it’s so correlated to freedom and euphoria, especially gender euphoria.”

Trochopoulos’ next step is putting together his first complete collection, which he will debut in London in February for the fall 2022 season. The collection will feature his signature stripe motif and he will also experiment with pattern cutting and beading and dying, as well as accessories like trousers and coats.

Ariella Maizner, a 12-year-old fashion designer, got her designs into Walmart