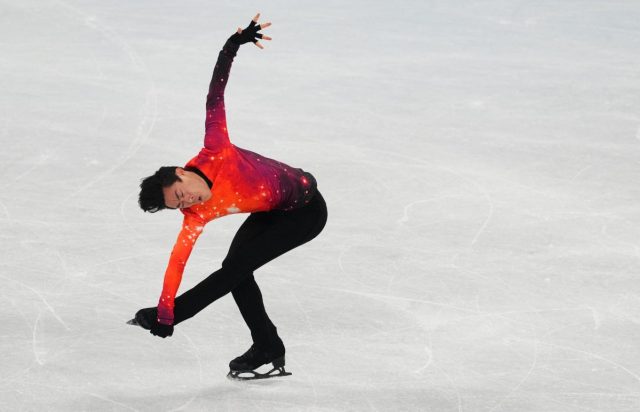 Nathan Chen, a 22-year-old American figure skating prodigy, is attending the Beijing Winter Olympics 2022. Having won a Bronze medal in the team event at the 2018 Olympics, Chen has performed in the men’s singles short program and free skating event so far.

However, Twitterati can’t seem to be able to handle the sight of Nathan Chen’s outfit for the free skating event. Thus, even though he won his first Gold Medal today, social media decided that Chen’s outfit was definitely not a winner.

As Nathan Chen began his routine at the free skating event at the Beijing Winter Olympics 2020, Twitter couldn’t seem to wrap its head around why he was wearing the outfit he was.

Even though Vera Wang, a popular American designer, designed his outfit. Twitterati don’t seem to love the design. Naturally, jokes and tweets have started to flood in. In fact, a Twitter user posted Chen’s outfit today, writing “another day, another horrendous outfit for Nathan Chen,”Follow us on Twitter.

Twitter clearly shows that sentiments are reciprocated, with other users adding their disapproval and disbelief to his outfit. A second user also shared his disapproval. wrote, “if Nathan Chen wins a Gold (medal) with that ugly f***ing shirt, I’m actually gonna be so mad”.

NOOO PLSSS who’s designing Nathan Chen’s outfits??? THE COMMUNITY NEEDS TO HAVE A CONVERSATION I BEG YOU… he skates amazingly but the costume just doesn’t do it 😭 pic.twitter.com/KkauPYvD1P

Another user shared how “the community needs to have a conversation” with whoever is designing Nathan Chen’s outfits. “He skates amazingly but the costume just doesn’t do it,”They expressed their opinions.

Furthermore, there were even those who compared Nathan’s look to that of a Cheeto!

Vera Wang is also a designer described how she felt privileged to design Nathan Chen’s outfits, a user expressed, “I think she’s mad at him,”Joking about how Wang might deliberately put Chen in outfits that are not as good as those of his competitors.

Vera Wang is also the subject of a report by The Verge “sick for this”. She also compared Chen’s outfits to a “zumiez 2014 galaxy print costume”.

Perhaps one of the most hilarious tweets was when another person compared Chen’s outfit to that of a “TikTok room projector light ad”.

Why is Nathan Chen wearing the tiktok projector light ad the olympics?

Clearly, Twitter has no love for Chen’s choice of outfit, even as he stood atop the podium with the Gold.

Nathan Chen won his Gold Medal at this year’s Winter Olympics and has now repaid his Bronze-winning performance.

Cheng won his first Olympic Gold Medal today, at the age of 22. Yuma Kagiyama from Japan won the bronze and silver medals.

Chen entered the free skating event with an impressive lead of 6 points. His record-breaking performance in the short program was what made this possible. On the other hand, Chen’s victory spelled defeat for Japanese figure skating star Yuzuru Hanyu. Hanyu had hoped for a third consecutive Olympic gold, but ended up finishing fourth in the standings.

NATHAN CHEN 🚨 What a performance 🇺🇸

After the 2018 Olympics, Chen was dialed-in at #Beijing2022Setting a WR for the short program and ending up GOLD with an amazing free skating session⬇️ pic.twitter.com/ccObiBITlH

Chen is now a part history and the Gold is his to defend in the 2026 Olympics.

Ariel Rose - September 6, 2022 0
Shein by Shereé? The second coming of Shereé Whitfield’s She by Shereé clothing line has been marred by comparisons to the fast-fashion brand.  Social media...

Lincoln pre-teen taking on fashion industry, tapped to be a back-to-school...