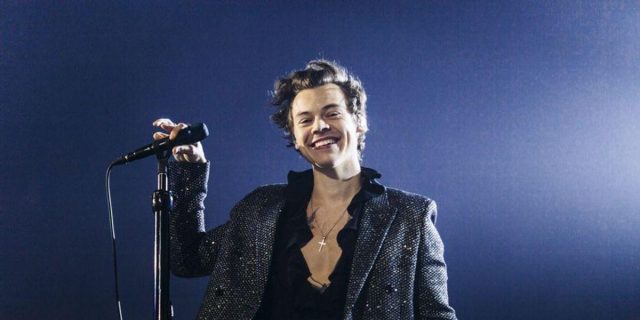 During his Love On Tour stop in Detroit, Styles found a fan holding a sign that read, “Should I text him?” which received boos among the crowd. However, in typical Harry fashion, his reply was simply, “is he nice to you?”

You can watch the full video here:

He concluded with, “My personal opinion is that if there’s any sort of games, trash, trash, trash, not for you,” a piece of advice that resulted in raucous applause and a flood of tweets from fans.

This is not your average fangirling. There is plenty of evidence that Harry Styles has been a champion of feminism in a way few men have succeeded. It goes beyond his fashion choices.

Take 2014, when he joined #HeForShe to support gender equality.

I’m supporting @UN_Women and @EmWatson in #HeForShe
As should you.. http://t.co/RYtM4SKkqN

Or in 2017, when he wore T-shirt that bearing the slogan “Women are smarter.”

Or my personal favorite, in 2017 when Harry had his Rolling Stones interview, and was quick to defend his fanbase.

“Young girls like the Beatles. You gonna tell me they’re not serious? How can you say young girls don’t get it? They’re our future. Our future doctors, lawyers, mothers, presidents, they kind of keep the world going. Teenage-girl fans—they don’t lie. If they like you, they’re there. They don’t act ‘too cool.’ They like you, and they tell you. Which is sick.”

It’s no wonder why some dub him the “Feminist Prince.” And with his special brand of sincerity and charm that encourages women to step into their own power…long may he reign.

From Your Site Articles

Related Articles Around the Web

Is Watkins A Sure Lock?

Ariel Rose - July 4, 2022 0
Courtesy It is generally easy to distinguish between workwear and party wear. The latter is more casual, business-like, comfortable, and can be worn all day...