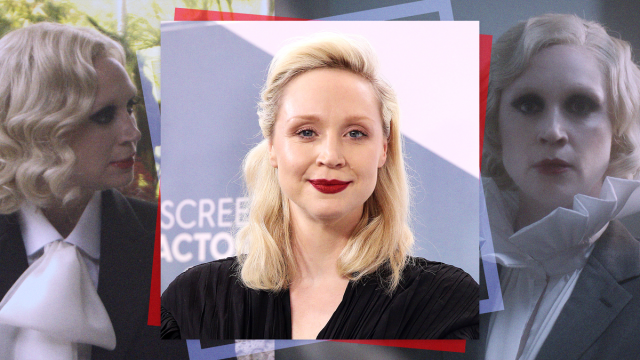 Gwendoline Christie’s Jan Stevens stands at the center of Peter Strickland’s new cinematic gastro-symphony Flux Gourmet. At the Sonic Catering Institute, Stevens oversees young sonic catering bands, which in the world of Flux Gourmet are avant-garde but popular noise music outfits that record meal preparation for sound and manipulate and layer that documentation in real-time as performance art. Part-producer, part-Victorian ghost wearing the albatross of helping artists achieve greatness, Stevens is the bedrock of the film. This fierce and complex spirit haunts everything that happens within the institute.

This hyper-specific, expectation-defying role was precisely what Christie was looking for. Having made trips to Westeros and galaxies far, far away, she wanted an entirely different challenge. The actor says she was like a “racehorse ready to go” when her In Fabric director Peter Strickland came to her with Flux Gourmet, gifting her an “extraordinarily complex, eccentric character with a will, wildly flamboyant visual sense.” It was her idea of “absolute heaven.”

The A.V. Club spoke with Christie about the challenges of bringing the otherworldly Jan Stevens down to earth.

AVC: This is your second film with Peter Strickland, the first being In Fabric. What drew you two back together?

It’s in the name
This blend of vitamins and essential oils from Provence Beauty can be used as a moisturizer for hands, nails, and hair, and like 50 other things, too.

GC: I loved Peter’s films, from the The Duke Of Burgundy. It was a really aesthetically arresting film, and it felt like a very fresh, new, and different voice. His films are very much my world of aesthetic and of tone, so it was absolutely irresistible to me.

I loved working on In Fabric, and I loved that Peter was totally up for the idea of transformation for me, the idea of me looking very, very different to how audiences, perhaps, have seen me before. And that was thrilling to me. He’s hugely collaborative and generous about the way that I might look. So the opportunity to play Jan Stevens, who is an extraordinarily complex, eccentric character with a wildly flamboyant visual sense, was my idea of absolute heaven.

The parts that I’ve played over the last 10 years I’m extremely grateful for. However, I wanted the opportunity to play something entirely different. And Jan, was that; this rich character who’s in control, who’s dealing with different methods of control, who’s dealing with different relationships, struggling with them, being domineering, being used to being pushed around, lashing out. It just had so much range and texture to it.

I felt that Peter had seen something in me that other people don’t necessarily see or hadn’t seen, and I was hugely grateful for that.

AVC: In 2019, you told The Guardian: “Clothes that make you feel more than yourself rather than as a woman wanting to be diminished, wanting to take up less room. I’m interested in exploring the opposite of that.” How did Jan help you do this?

GC: Peter was very, very collaborative with the costumes, which I worked on with my partner Giles Deacon. We were able to have a creative dialog that was really about me expressing directly to a designer my thoughts about the character. And then that designer, who I obviously have a very close relationship with, executing these designs. Someone that knows me very well, knows my strengths, loved the script, and loved the character. It felt like a very fulsome creative expression for me.

It all stems from the character. It all stemmed from what was on the page and what that meant to me. And so I saw a character who was, and I had extensive discussions with Peter as well about, a woman who is the owner of this large house. It’s not on the page how she’s come by it. I mean, I have my own story as to how she’d come by that house.

AVC: I’m so interested in Jan’s backstory. Can you take us through that a little?

GC: You can tell I’m embarrassed about talking about it. It is much more interesting when it’s not talked about and it’s just what you receive. It’s irrelevant what was in my mind. What I’m interested in is what was in your mind watching it. I’m interested in where you think Jan comes from and how you are interpreting her behavior in that house. So what were you thinking about?

AVC: I assumed that she was the caretaker of this institute. She mentions at one point she has predecessors and that they’ve just been doing these residencies for many years. But Jan feels elemental to the house. She’s almost like a spirit in the house.

GC: That’s how it felt very much to me, that she and the house were one. I loved being in the house, and I loved absorbing it. I thought the house was really phenomenal, and the environment was really integral. It’s Jan’s stage, that house. It’s her. It’s an extension of her. So when she dresses in that way every day and has her hair prepared in that way and the makeup that she chooses to wear with that extreme look, that is Jan’s honesty. That’s exactly a display of her passions and the way that she would like her life to be. It is an insulated life. She is living in that house, and her spirit comes alive through the people that enter it. And then, obviously, her interactions with the sonic catering groups, that is what is keeping her alive. It’s generating it. It’s a figure eight. So the clothing is absolutely an expression of Jan’s personality.

GC: Well, I mean, Fatma is a wonderful actress and I love watching her and I loved working with her. Jane and Elle have such an antagonistic relationship. That requires a certain level of tension in the scenes because that’s the way that the scenes are written. That’s what’s on the page.

We didn’t have an awful lot of money, and certainly much less time to make the film, so it was really thrilling to work with a group of actors where you would go in and you might not have hundreds of takes. It’s all there immediately. We all love the writing, so we relish playing those scenes. They had such texture.

For me, it was such an incredible opportunity and such a contrast to everything I’ve played over the last 10 years. I’ve been waiting for this opportunity. I was like a racehorse just ready to go. And those actors are all so brilliant. It was the same. It was total play. I love just watching them and listening to them and responding to them.

AVC: How does it feel to play a character where as soon as you walk into a room, the main character whispers your name in fear?

GC: I loved it in the script. It really made me laugh out loud. I loved the challenge that that presented because you have to develop the character that triggers that response. I feel very lucky that Peter was so generous and collaborative as to allow Jan to really, really grow and to be everything that we both wanted her to be. It was really thrilling to be so welcomed with a range of different things, but also to explore that space of supervised female rage. And as a device, I mean, it’s just so hilarious and wonderful. It’s wonderful to have the opportunity to play a character who’s so imposing that some people whisper their name in fear.

AVC: I really like your point about supervised female rage. Elle sets that up early in the film with her dismantling of the homemaker guide she reads from. What about the performances that let everyone on set express that kind of rage and break it apart?

GC: It was very potent, actually. But, you know, all of the scenes were because we didn’t have the resources to have many goes at it. I was very aware of that prior, so I knew I had to be incredibly prepared and I relished that. And so every scene that we did was incredibly potent because we had very little time and we had to get it. The whole shoot was consistently at a very high atmospheric level. And afterward, I was spent.

AVC: Are there any thoughts about Jan that you’ve been meaning to say in your marathon of interviews but haven’t had the chance to?

GC: I just feel so grateful for this opportunity to play this character. And I really, really mean that because it’s required someone, Peter, to see something in me other than what has been presented to the world over my career so far. And I just found it so fulfilling and thrilling to play Jan Stevens and to have this opportunity to explore such a fulfilled and different world in detail and to have also such narrow parameters in which to achieve what we needed to achieve. Most things you’re seeing on the screen are achieved in just a couple of takes.

However what I really like about Jan is that I believe that she is a personality within the faculty of which we haven’t seen for some time, which is past movie noir. Past Giallo. It was so thrilling to play a really nuanced, specific, detailed, fueled girl with nice flamboyance and deep, deep ache, and loneliness. I believe Jan is determined to be cherished and actually devastated when all of it falls aside. However she simply has to return to work.

Real Housewives of Atlanta Mid-Season Trailer Is Here: It’s All About...