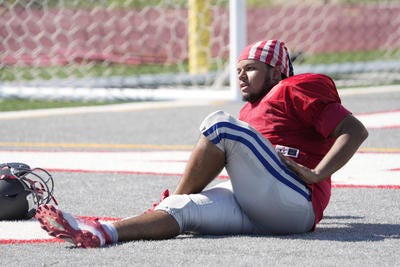 Isaiah Thomas didn’t play football until this year. It has been a refuge for Thomas that has helped him forget his past, get through the day and look forward to the future.

American Leadership Academy Ironwood is where the senior two-way lineman has a chance to get started and has an outlet for his anger.

“I feel like I have been much more happier, much more energetic,” Thomas said. “I’ve been wanting to do more things.”

His mother died four years ago from cancer. He moved from San Francisco to live with his uncle in southeast Valley. He feels that his family has provided him stability.

Thomas, who turns 18 in February, said that his father has been in prison. His uncle Carlos Burgos moved to Phoenix to help him.

“He deals with a lot of anger issues, and I guess the way he dealt with his anger in the past wasn’t the best,” Burgos said.

“He’s been here going on a year and a half and I know it’s going to take some time for him to adjust,” Burgos said. “The best advice I can give him is that he can be more, I guess understanding. His situation in the past was bad. But he can be more understanding and patient.

Coach Travis Epperson said that Thomas has potential in football, a sport that has helped him channel his aggression in a more positive way.

“He’s figuring (the game) out, and the excitement with the guy around him is helping him enjoy it,” Epperson said. “His technique is raw, but his desire is there. That’s the No. 1 thing.”

Thomas has seen football offer positives in his life.

“I feel like I’ve found more than a way to get my aggression out,” he said. “I feel like I have some friends here, family. It helps me to be close with my teammates.

“I really appreciate them. They’ve been there for me.”

Thomas will help lead the Warriors at home on Friday night against Phoenix Arizona Lutheran in The Arizona Republic’s Week 2 High School Football Game of the Week.

Game of the Week: Arizona Lutheran, ALA Ironwood football a contrast in styles

Travis Mbuya, a senior who starts at linebacker and tight end, hadn’t played a lot of football growing up. He’s a shining example of how hard work combined with a desire to play has allowed him to become one the team’s best players. His parents were from Kenya. Travis was born in Mesa and grew up in the Valley.

“I’ve been playing football for five years now,” Mbuya said. “Football was my first sport. I started with that, then shifted to wrestling. But football stuck the longest.”

ALA Ironwood went 4-6 last year and is now trying to attain elite status in the American Leadership Academy charter community. The Arizona Interscholastic Association promoted both ALA Queen Creek (5A) as well as ALA Gilbert North (4A) to higher conferences this year due to their success.

“Every year, we’re more and more willing to work,” Mbuya said. “I like the potential. I see a lot of young athletes here.

“It’s been fun to see this team grow over the years. I believe that ALA Ironwood will not be known as the “middle child” or the “little one” in the next few years.

Epperson believes the program is turning the corner, even though he might start seven sophomores.

“They haven’t dealt with the losing for four years,” Epperson said of the younger players. “All they know as a freshman, they won four games. As a sophomore, they want to do more. It’s kind of that youthful, they don’t know what they don’t know. I feel that’s working in our favor. They just want to play hard and play the right way.”

To suggest human-interest story ideas and other news, reach Obert at [email protected] or 602-316-8827. Follow him on Twitter @azc_obert.