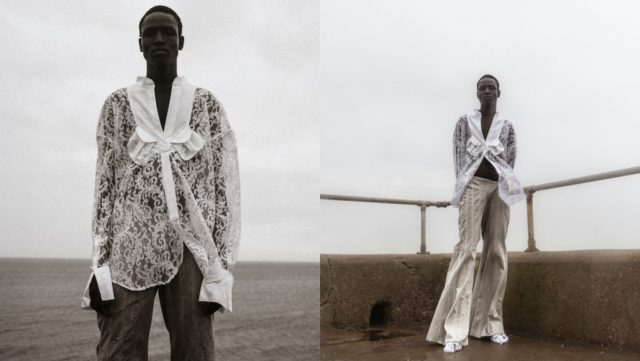 Fashion school students around the world are preparing to enter an industry that’s rapidly changing. There are courses to pass, design prompts that you need to master, runway shows to prepare for, and professional connections to make. In our series, “Fashion School Diaries,” those students give us a firsthand look into their day-to-day lives. We meet Benjamin Spencer, a 2022 Regent’s University London Fashion Design and Marketing Bachelor’s Degree student. graduate.

In March of 2020, during his second year at university in London, Riac Oseph was forced to move in with his grandmother in India, the rest of his family stuck in Kuwait, where he’d grown up. Oseph was also temporarily paralyzed by a serious illness. He thought about how all he wanted was to be hugged.

Oseph is a recent Regent’s University London grad with a Bachelor in Fashion Design (Marketing) degree. His final collection explores the memories of a hug. Oseph started by asking his Instagram followers and Twitter followers what a hug meant. Then he compiled and pulled together the answers from all of them (mostly similar). Thus, the collection and its name were born: “Hugs (I Miss You).”

Aesthetically, Oseph’s research for the collection began before then. For the past three years, he has been documenting and collecting images of immigrant uncles in their element — back home in Kuwait and beyond. The nuances of how Indian, Arab, and uncles of all ethnicities dress and adapt to new surroundings — professionally and socially — is a key theme. Oseph also referred to contemporary artists like Ritika Pandey, a Mumbai-born artist. Oseph was awarded the Fashion Industry Award from his university for the collection’s cohesion.

Scott Bowlby was a Central Saint Martins MA Fashion Image student. He shot the lookbook in Brighton on a sunny summer day. Bowlby’s images invoke a sense nostalgia and warmth while highlighting a modern twist on menswear. In this context, the clothing shows how the days of toxic masculinity and emotional inability are over.

Oseph took time to reflect on his fashion studies and the process of putting together this collection. He also considered what he would like to do next.

“I’m from India but I was born and raised in Kuwait. Growing up, I was aware of the art and fashion worlds, but they felt distant — like a completely different universe. My parents were always very encouraging of us broadening our horizons though, so they enrolled us in everything from drawing to breakdancing. It’s hard to pinpoint exactly how I crossed over to fashion but I used to zone out in class sketching clothes on my textbooks from as far back as fifth grade.

“My fondness for fashion grew deeper in my teens when I discovered Polyvore and the online fashion community. The previously distant world seemed more accessible by putting these garments together and sharing them. It wasn’t long before I pulled the brakes on my stereotypical Indian software engineer path and set a trail to London.

“Regent’s University was great. That studio is and forever will be one of my favorite places on earth. The studio environment there is like no other. Fashion can be intense, but we laughed our way through the ups and downs every single day. Being in the heart of Regent’s Park meant we had the most therapeutic surroundings to escape into. My classmates Gracey, Khudija and I would frolic in the grass like little kids to shake the stress off regularly.

“I chose Regents University because they offered a marketing pathway in the Design program, which I really wanted to do. I’ve grown so much as a creative person as a result of being there, mainly because of the depth of exploration and breadth of experimentation I was able to do on the course. Having to think not only from a designer’s perspective, but from a photographer, marketer, and illustrator’s perspective simultaneously unlocked a level of understanding within myself I didn’t have before.

“The collection is called ‘Hugs (I Miss You)’. It’s best described as a meditation on the longing for a hug. I tend to lean into my art as a tool to untangle my psyche, using it to understand what’s bothering me and, more importantly, why it’s bothering me. This collection stems from a particular moment of vulnerability over the pandemic when I fell sick with erythroderma, a rare skin condition. I was stuck in India at this time, and my family, who were in Kuwait, could not fly to me due to the lockdowns. Wanting the comfort of a hug so bad, but not being able to get it was such an interesting position to be in — a feeling so simple, yet so complex.

“For this collection, I decided to hone in on that feeling, unpack it and, to some extent, make peace with it. I started by talking to people, both in person and on Twitter, about what a hug meant to them and the emotions it sparked, as well as what a memory felt like. Studying the similarities in the responses informed the curation of my ‘research galleries’ — a bank of photographic references that helped me visualize the feeling I was trying to crack into.

“The research gallery was split into two parts, the hugs gallery largely consisting of photographs of people in varying forms of embrace, from parental to friendly to sexual. The memory gallery consisted of surrealist collages from artists like Rithika Pandey and Bharat Sikka, an abstract representation of that jumbled, distorted nature of a memory.

“Jumbling the former in the style of the latter, then embedding points of tension between the bodies into the clothing using anti-fit cutting techniques formed the basis of the collection. The distortion is more apparent in some pieces, like the T-shirt that feels like a hug when worn or the oversized shirts whose sculptural forms can be adjusted to the wearer’s liking. In other pieces, the kurtas and leather bomber jacket, the distortion is more subtle — affecting the way the garments feel, more than the way they look.

“The fabrics are all inspired by my ongoing ‘Unclecore’ photo project—a meditation on the nuances of immigrant uncle dressing, zoning in on how their traditional dressing sensibilities seep into the way they put things together in their new environments. Checks and stripes in merino wools and cotton shirtings accentuate the distortion in the clothes the same way they wrap around an Indian uncle’s belly.

“I definitely want to get some industry experience in a design capacity. But in the long term, it’d be nice to have a studio practice of my own. I enjoy designing more than anything in the world but I do not want to be forced to do a collection every six months for the sake of running a business. It’d be nice to have a practice that’s broad enough to support itself through varying mediums so that each project that’s released is one with substance. I also just want the space to mess around and create with my friends, and get us all paid!”

Huge 80s Party at Friday After 5 in Downtown Owensboro

Shop Great Lakes Crossing Outlet this Black Friday for all of...