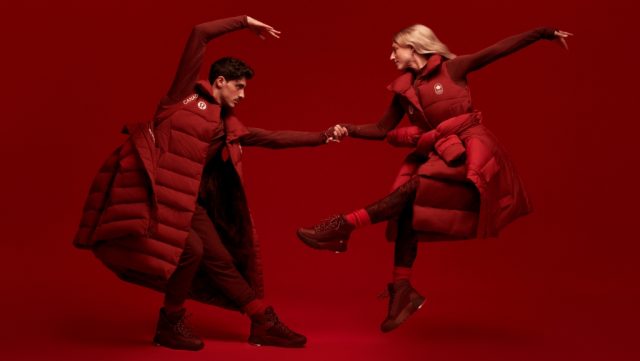 Many major fashion brands have celebrated the 2022 Beijing Winter Olympics with high-tech uniforms and capsule collections for athletes.

Ralph Lauren is back to design the official Team USA uniform, sticking with the traditional red, white and blue colorway in a collection of winter wear that’s also designed with temperature-responsive fabric that expands and contracts on the wearer in response to temperature changes.

Kim Kardashian West’s Skims brand is also continuing its partnership with Team USA as the official sponsor of the team’s loungewear, sleepwear and innerwear. Kardashian West began the partnership in preparation for the Summer Tokyo Olympics.

Other countries are also getting their uniforms designed and manufactured by major brands. In a big shift from the country’s denim uniforms for the Summer Games designed by Hudson’s Bay, Team Canada has joined with Lululemon on a multiyear Olympics partnership starting with the Winter Games. This Olympics, the athleticwear brand took inspiration from the red maple leaf on the country’s flag, creating activewear pieces in a rich red hue for the athletes.

Columbia Sportswear will create the official uniforms for Team USA’s curling team. To maximize mobility, the brand has created jackets, pants, jerseys, and accessories in a four-way stretch fabric. The pieces are also made with abrasion-resistant materials and Columbia’s Omni-Wick technology for accelerated moisture evaporation.

Kith has designed a new Olympic-themed collection to commemorate the winter games. Kith created a brand new logo for the partnership, and 27-pieces of the collection are Kith staples reimagined.

The pieces include a midi puffer coat and a quilted, track jacket in white with a custom-made snow mountain graphic. Other pieces include hoodies and cardigans, reversible bucket caps, socks, water bottles, and snowboards.

Lululemon has signed a multiyear partnership with Team Canada to design the country’s Olympic uniforms. For the Winter Olympics, the team’s uniforms take inspiration from the red maple leaf in Canada’s flag, with pieces like puffer jackets, sweaters and leggings made in a rich red hue. Some pieces are also embossed with the maple leaf, such as Team Canada’s bag.

Ralph Lauren returns to design the official Team USA uniforms. The garments feature a unique temperature technology. The team’s Opening Ceremony Parade Uniform includes an anorak, midlayer jacket, pants, gloves and boots in a red, white and blue colorway. The uniform is designed with Ralph Lauren’s signature pony logo, as well as that of Team USA.

The brand incorporated an Intelligent Insulation technology into the garments, which is a temperature-responsive fabric made with two materials that expand and contract in response to temperature changes.

Customers can also buy the uniform through Lauren’s website and at select retail stores.

Kim Kardashian West’s Skims has signed on again to be the official Team USA sponsor for loungewear, sleepwear and innerwear. Kardashian West founded the partnership for Tokyo Summer Olympics.

Skims has a selection of tank tops to choose from, including boxers, leggings or T-shirts.

Apparel label Spyder has teamed with artist Eric Haze to design the uniforms for Team USA’s ski teams. Haze’s collection includes outerwear, base layers and accessories that are sustainable and include the artist’s star logo and hand-painted pattern work. Spyder and Haze designed the uniforms based on athletes’ feedback.

A similar collection is being offered on Spyder’s website for purchase, ranging in price from $25 to $149.

Volcom is the official outfitter for Team USA’s snowboarding team, with the uniforms sporting a red, white and blue striped faux rabbit’s foot for good luck. The brand will be creating three uniforms, the Owl 3 Layer Gore-Tex jacket as well as L Gore-Tex trousers in a relaxed fit for the team. “Brighton”Freestyle jacket “Hotlapper” sweatpants. The brand has a similar apparel collection available on its website, which is ideal for Olympics fans.

Ben Sherman has returned to design the official uniforms for Team Britain. The brand provided the uniforms for the opening ceremony. It wore a sweater bearing the Union Jack under a navy jacket, with matching navy trousers, and a matching beanie.

Uniqlo will be dressing Team Sweden for the Olympics by creating uniforms in collaboration with the athletes. The uniforms are made from sustainable materials and include various technologies such as the warming technology in Hybrid Jackets.

What to Expect from New York Fashion Week Fall 2022

Ariel Rose - August 6, 2022 0
A new study came out that placed each state into a Hogwarts House and New Jersey’s pick could not be more accurate.Whether you’ve...

the Gen Z and Millennial Fashion Statement on Feminism

Ariel Rose - July 30, 2022 0
It's Harry's HouseWe live in it. Gucci does, in fact. Harry Styles is totally absorbed in the double-G lifestyle. His Love on Tour...