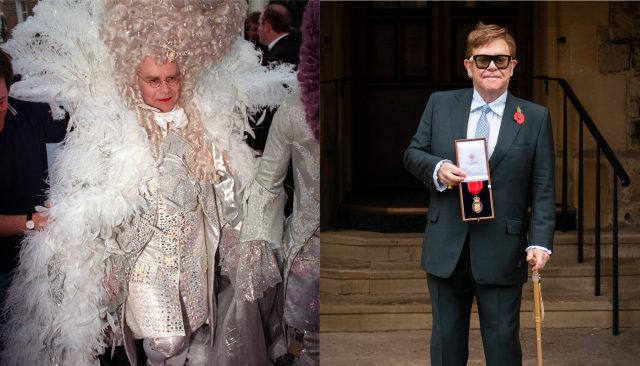 Sir Elton John has been honored for his glittering music career as well as extensive charity work.

The Prince of Wales made the 74 year-old a member of the Order of the Companions of Honour during a Windsor Castle investiture ceremony. He wore an unusually simple black suit.

Sir Elton John, after being made a Companions of Honour in recognition of his services to Music (Dominic Lipinski/PA).

The musician said: “I’ve had an amazing life, music has been my life, and I got this for music and for work for charity. I may not look as if I’m 100% fit – but I’m not quite – but I’m still raring to go and I’ve got a lot more work to do as far as my life goes.

Sir Elton has released a hit single in every decade since the 1970s – including Bennie And The Jets and I’m Still Standing – and has cemented his status as a bona fide style icon along the way.

He’s carved out a niche as the king of feathers, sequins and OTT stage outfits – recreated in great detail in the 2019 biopic of his life, Rocketman.

At the Dodgers stadium…

Sir Elton wore a Dodgers uniform for a 1975 concert in Los Angeles. This was one of his many collaborations with designer Bob Mackie – who was responsible for some of Cher’s most glamorous outfits too.

He spoke to V Magazine in 2018: “Bob has said that his approach to dressing me for stage was to “treat me like a male showgirl” – and that’s exactly what we did! We shared so many ideas. He couldn’t make the clothes fast enough. Bob made some fabulous outfits for me—feathers, sequins, glitter—totally outrageous one-offs. They make me laugh when I look at them. We had so much fun!”

The Dodgers outfit has been one of his most popular, especially after it was recreated by Rocketman and Harry Styles for Halloween 2018.

In the film Tommy…

In the film Tommy, (Alamy/PA).

Sir Elton played the Pinball Wizard the 1975 film Tommy, based on The Who’s rock opera album. He was dressed in a typical on-stage outfit – lots of bright colours, sequins and a strange hat – with the unusual addition of Doc Martens made into stilts, so he towered over everyone else.

In a military-inspired costume…

Sir Elton donned a number of military-inspired looks in the eighties, complete with large epaulettes and lots of badges. His head was balanced by a hat.

Stars were rarely seen without supersized statement glasses, which were often coloured or sequinned.

V Magazine interviewed him: “I’m proud of the part I played in moving eyewear from function to fashion. My eyes needed the functionality, but ‘blowing up’ what could be done with frames and lenses gave me an exciting new way of expressing myself. They also allowed me to cover up the extreme shyness I needed to hide as a performer.”

At his 50th birthday party…

Sir Elton is known for his extravagant themed birthday parties. In 1997, his 50th birthday was no exception. He wore a white, feathered-and-sequinned Louis XIV suit, complete with a voluminous curl wig and a miniature Spanish warship. His costume was so big that he couldn’t take a normal car to the venue – and had to arrive in the back of a van.

The musician formed a close relationship with Gianni Versace in the 1990s, often wearing the designer’s clothes. He threw a party for the Elton John Aids Foundation at Versace’s Old Bond Street store in 1997, wearing an eye-catching pale blue silk suit, accessorised with a cross necklace and typically Nineties-style small sunglasses.

Sir Elton today wears a lot less feathers these days than in the Seventies but he still has his signature style. He regularly wears a pair of his famous glasses and a highly embellished jacket – as seen at the 2019 Vanity Fair Oscar Party.

On his farewell tour…

Sir Elton has been a close friend of the Italian fashion house Gucci in recent years. Creative director Alessandro Michele has designed the singer’s outfits for his Farewell Yellow Brick Road tour – set to resume in 2022 – and you can expect a lot of logoed, bejewelled jackets. This outfit is reminiscent to the 1973 album cover of Goodbye Yellow Brick Road. However, it has a lot more detail.

Daily highlights of the best videos

You can watch the stories that matter right from your inbox.

Dispatch from Blakely Island: Biology in the Field