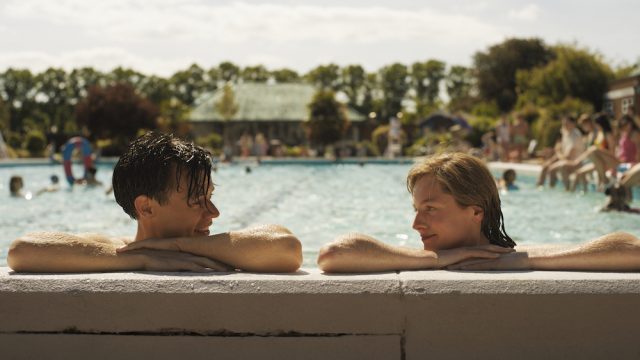 To belt or to not belt?

That was the question bedeviling Annie Symons, the costume designer of Amazon’s “My Policeman,”When it came down to outfitting Harry Styles. The film, streaming Nov. 4, features Tom, a gay constable forced into an unhappy marriage in 1950s Brighton. And, you see, it turns out that police officers at the time didn’t wear belts, which was a little bit of a problem for Symons.

“I needed Tom to look young, svelte and handsome and prior to introducing a belt, policemen looked a bit like navy blue tree trunks,”Symons. “I had raging arguments with the so-called experts, but ultimately I decided to leave all the academics shaking their heads and the belt went on.”

To make the uniform, Symons used wool from a military fabric supplier. She also changed the color of the uniform to make it more appropriate for the period.

“The original uniforms were almost black,”Symons. “It didn’t work on screen. I felt it would be better if they were bluer. It gave Harry an aura that made him seem more attractive and youthful and less authoritarian. When you have a young, handsome actor like Harry, you work with that. You don’t run away from it.”

She is open to using historical license for creating costumes. “I approach it emotionally and visually,”Symons. “That’s the most important thing.”

Styles is a fashion icon whose off-screen, slightly androgynous looks are at the cutting edge of haute couture. Symons said that Styles was willing to wear whatever she wanted during shooting.

“My Policeman”It takes place at an interesting time in British history. Rationing, a staple of life during World War II and its aftermath, was just winding down, but the country’s economy had been devastated by the conflict and most people were still struggling financially. Symons made a point of only giving Styles’ character Tom, as well as Patrick (David Dawson), his museum curator lover, and Marion (Emma Corrin), the woman he marries, only a few outfits.

To make sure the outfits were period-appropriate, Symons consulted old Pathe newsreels, as well as her family photos and those of Michael Grandage, the film’s director. Symons was particularly interested in swimwear from this era. In “My Policeman,”Marion and Tom meet at the beach. Their relationship intensifies after he agrees teach Marion how to swim.

“There was a weight to the bathing suits of that time and a heaviness,”Symons. “There was a modesty about it as well. It’s not evidently sexual. It is quite coy in a way.”

“We needed something that wouldn’t be warped by all the chlorine in the pool,”Symons. “We did a lot of experimentation with buckets of bleach before we found the perfect fit.”

It was pointless to try to find a vintage bathing costume. “They all look a bit ropy,”Symons. “We needed something that looked new and fresh, not tired and exhausted.”

Live Commerce Has Captivated China. Here’s How it Will Take Off...

Ariel Rose - July 12, 2022 0
Livestream shopping is becoming a hugely popular trend, just like QVC's Gen Z. This trend was first noticed in China during the coronavirus...

Cutest Back to School Fashion Pieces 2022