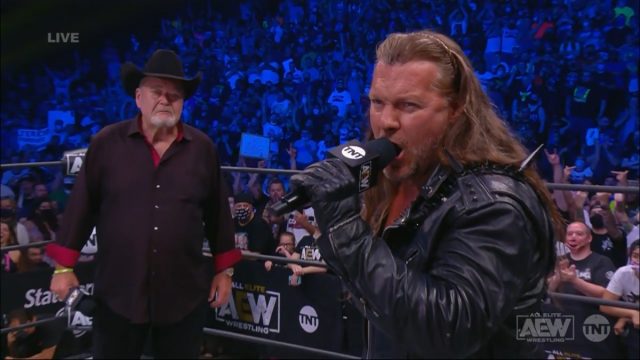 The most recent “Talk Is Jericho”Chris Jericho discussed some of the most memorable moments in AEW’s history on his podcast. He talked about the behind-the scene stories of his signing with the company. He also talked about the first live Dynamite, winning AEW’s World Title, and the stories behind his feuds and disputes with Orange Cassidy and MJF.

Jericho speaking out about going to AEW in the midst of talk of it beginning up:

“When the idea came for AEW, and you’ve heard it a million times. ‘Oh, there’s a new wrestling company. This guy’s got some money.’ Whatever. Same thing over and over again. It took me a while to really believe what Tony was talking about because what you need to start a company is you need money and a lot of it, which the Khan family has. You need a great television deal, which we didn’t have at the time, but we finally got it with TNT and TBS. You need a collection of guys who aren’t retreads or haven’t lived up to their full potential, and we had that with The Elite right out of the gate, and then bringing in Moxley right out of the bat for the first show that we had. That’s a guy who was not even close to living up to his full potential. You can see that now. Moxley now is so much better and bigger than he ever was as Dean Ambrose. So we had all three of those things, and also a passion and a desire, and there was a point to prove.”

“So when I really started going to AEW, it really ignited my passion and love for wrestling, and more importantly, I said I can really cement my legacy with this because I could stay in WWE and it doesn’t matter. It’s always going to be good if I’m there. Anything that I do, at the risk of sounding egotistical, anything I do is going to be good, but if I go to AEW and it becomes something, we now have changed the course of wrestling history, and it’s basically on my back. The first three or four months in AEW was on Chris Jericho’s back completely. So it was, if we can make this work, suddenly there’s a whole different level of legendary status to Chris Jericho.”

Jericho talks about ideas for TV, before they signed the TNT deal.

“At the time, there was no television deal. I remember at some point we were talking about maybe going on Showtime. At some point, we were thinking maybe streaming it on, I don’t know, Amazon Prime or something along those lines, and that’s not good enough. You can’t put it on Showtime or whatever. Then [TNT] got interested I think because Chris Jericho was involved and Jim Ross. I think those two names were the two names that got us the TV deal along with Tony’s passion and his commitment and all the other factors I told you.”

Please credit if you use any of the quotes in this article. Talk Is JerichoThanks to WrestlingNews.co, for the transcription.

Ariel Rose - September 25, 2022 0
BOSTON – A man formerly of Woonsocket, RI was arrested this morning and charged with surreptitiously filming an 11-year-old Massachusetts girl changing in...

How to style a flannel for fall