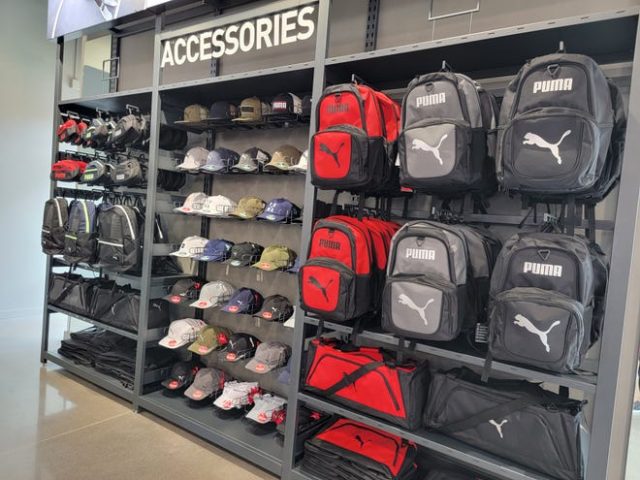 Get ready to do some back-toschool shopping.

Four new stores were opened at Outlets of Des MoinesAltoona’s discount shopping center offers sports apparel, shoes, classic attire, home decor, and more. By the end of the year, another five new stores bring fashions and more to the outlets.

There are more than 50 shops, including Old Navy and Skechers. The open-air shopping center debuted in 2017 with more than two dozen stores and a couple of quick-serve restaurants.

Now for its fifth year, the outlets bring in nine new stores, including Puma, Bizzy’s Boutique, Windsor and J.Crew Factory, which just opened. Here’s a look of all the new or in development stores.

Puma is the most recent opening at the discount center, bringing a 7,492-square-foot store filled with sneakers and sports equipment for men and women to space 810. Shoppers can find sportswear including footwear, apparel, and accessories at value pricing.

While stores such as DW Designer Shoe Warehouse, Champs Sports, Famous Footwear and Foot Locker carry Puma, this is the only stand-alone store in the region.

More:Iowa’s tax-free weekend: Here’s how you can avoid paying sales tax on clothing, shoes this month

Bizzy’s Boutique offers women’s and children’s clothing as well as accessories, home décor, gifts and game day apparel in a 3,500-square-foot store in space 570. The company’s Love, Izzy Project provides a swaddle blanket for babies admitted to a local NICU for each one purchased, with a goal of 1,000 swaddles a year.

Bizzy’s already has a location in Ames at North Grand Mall.

Also new this year, J.Crew Factory with 50% off classic attire for the whole family. It’s available in space 800. The company currently has 147 J.Crew Factory shops in almost every state in the United States. Altoona’s store occupies 6,527 square feet.

The family-owned Windsor out of Southern California opened its newest store on Thursday. The boutique sells women’s clothing meant to inspire and empower. The brand carries attire for special events and celebrations to those little everyday occasions.

Windsor moves into 515, which has 4,000 square footage. Windsor also has a space at Jordan Creek Town Center.

Still to come this summer, new stores from Nautica, Aéropostale, Forever 21, and Rue21.

NauticaWhen it opens in space 710, it will offer nautical-inspired clothing for children, men, and women.

Von Maur, Cabana Swim, and Marshalls all carry Nautica locally. However, this store will be the only one for the brand in Des Moines.

Aéropostale caters to guys and gals ages 18-22 who are looking for casual apparel and accessories. Fashion basics and denim are two examples of the attire that shoppers can find.

Forever 21The mall covers more than 15,496 sq. ft. This is the second Forever 21 store in the area; Jordan Creek Town Center houses the other.

You can find everything you need, from fashion basics to high-style designs.

Rue21 brings women’s and men’s casual apparel and accessories that appeal to the 21-year-old crowd in space 520. The space, which measures 5,000 square feet, will open before the end of the summer. Merle Hay Mall also offers Rue21.

Retail appointments of the week

These Christmas Toys May Be Incredibly Hard to Find in Illinois

Queen’s funeral outfits: What will the Royal family wear?